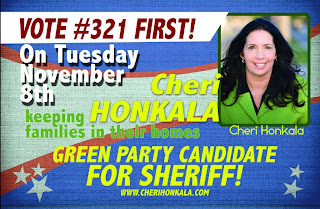 I urge support for Cheri Honkala, who is running for Sheriff of Philadelphia on a platform of no evictions and no foreclosures. Cheri Honkala may be the only Occupy candidate in the United States, and her example deserves to be imitated wherever possible. An experienced activist, Cheri is running on the Green Party ticket against a Republican and a Democrat, neither of whom has matched her pledge to protect American working people from the outrageous thievery of the banksters. Cheri knows the drama of homelessness first hand: she and her nine-year-old son became homeless and were forced to take refuge in an empty home owned by the US Department of Housing and Urban Development, where she was arrested. Cheri Honkala regards housing as an inalienable human right, which places her firmly in the tradition of Franklin D. Roosevelt’s Economic Bill Of Rights of January 1944. She has also called for permanent solutions to the homelessness crisis through the construction of low-cost, affordable housing.

As Sheriff of Philadelphia, Cheri is pledged to refuse to throw any family out of their homes, nor will she honor or issue any writ to that effect. She is a critic of the totalitarian Patriot Act and an advocate of the free exercise of Constitutional rights, including the economic rights implicit in the general welfare clause. She will also refuse to cooperate with the racist witch-hunts of the ICE, which has continued under Obama to conduct raids, separate families, and deport immigrant workers.

Philadelphia Needs a People’s Sheriff, Not a Robo-Sheriff for the Banksters

Cheri Honkala’s campaign is a model and paradigm for what activists should be doing all across the United States. She is showing how campaigns for elected office can cooperate with the mass strike movement more generally. Bank of America and other zombie banks have notoriously used robo-signers, bribed robo-judges, and corrupt robo-cops to steal people’s homes. As People’s Sheriff of Philadelphia, Cheri Honkala will provide a lesson in how local governments can be used to assert justice against tyranny. Philadelphia needs a People’s Sheriff, not a Robo-Sheriff in the service of Bank of America.

Cheri is not foundation funded and needs contributions now to get out the vote on November 8. For more information, please go to cherihonkala.com or call 215-923-3747.
Posted by Robalini at Sunday, November 13, 2011