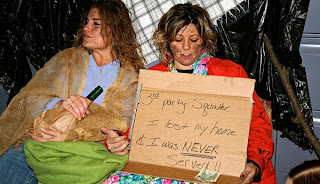 Based on their Halloween costumes from last year, it would not be surprising if employees from foreclosure firm giant Steven J. Baum dressed up this year as homeowners who’ve lost their property thanks to firms like them.

In a column from The New York Times Joe Nocera, a former employee of the Baum firm revealed that his former co-workers did indeed dress as downtrodden individuals with signs representing their depressed state. The ex-Baum employee, who Nocera kept anonymous, told the Times reporter that she wanted to show how the firm had a “cavalier attitude” towards foreclosing people’s homes.

After getting word of Nocera’s story, the firm vehemently defended itself, saying the column was “another attempt by The New York Times to attack our firm and our work.”