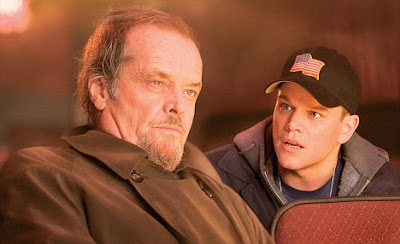 A rogue FBI agent has been jailed for 40 years for killing a witness who was about to testify against the Mob.

A judge told FBI agent John Connolly he had 'crossed over to the dark side'.

The former agent's decision to switch sides was said to be the inspiration for the character played by Matt Damon in the hit film 'The Departed.'

During a two-month trial in Miami, Florida, a jury heard that Connolly, 68, was on the Mafia payroll - receiving money from notorious Mob leader James 'Whitey' Bulger who ran the Winter Hill gang in Boston in the 1980s.
Bulger is the FBI's second-most wanted fugitive after Osama bin Laden and is being sought for involvement in 19 murders.

The court heard that Connolly would supply his Mob connections with tip-offs about police raids and leak the names of informants.

He was convicted of the 1982 murder of businessman John Callahan, whose bullet-riddled body was found in the boot of a car at Miami Airport.

Connolly told his mob connections that 45-year-old Callaghan was preparing to give evidence against the notorious Winter Hill gang in Boston.

A 'hit' was taken out on the father-of-two before he could implicate Bulger.

Connolly has denied being a corrupt agent.

He said: 'I never sold my badge. I never took anybody's money. I never caused anybody to be hurt, at least not knowingly, and I never would.'

Prosecutors had asked that Connolly be given a life sentence, saying the 30-year minimum was not enough because Connolly abused his badge.

At the end of his trial in Miami, Florida, Judge Stanford Blake, said: 'Mr Connolly, the jury has found that you tarnished the badge that so many wear proudly. For an FBI agent to go to the dark side is a sad, sad day for any judge or any society to see.'

Connolly, who retired from the FBI in 1990, is already serving a 10-year prison term for his 2002 federal racketeering conviction for protecting Bulger and his side kick Stephen Flemmi.

He warned them to flee just before the gangsters were indicted on federal charges in Boston in January 1995.
Posted by Robalini at Wednesday, January 21, 2009

Email ThisBlogThis!Share to TwitterShare to FacebookShare to Pinterest
Labels: FBI