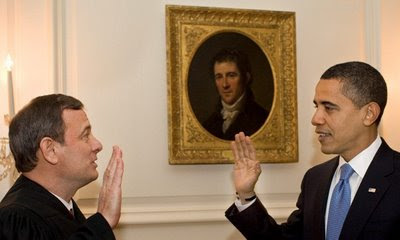 "At Mr. Obama’s second swearing-in on Wednesday...(t)he photo released by the White House had been taken by its own photographer." (NY Times, Jan. 23, p. A16).

A Cryptogram from the Cryptocracy?
Michael Hoffman investigates
RevisionistHistory.org

"For a couple of smooth-talking constitutional experts, Chief Justice John G. Roberts Jr. and President-elect Barack Obama sure had a hard time getting through the constitutional oath of office...The chief justice seemed to say 'to' rather than 'of,' but that was not the main problem. The main problem was that the word 'faithfully' had floated upstream...Mr. Obama seemed to realize this, pausing quizzically after saying 'that I will execute –'

"The chief justice gave it another go, getting closer but still not quite right: “faithfully the office of president of the United States.” This time, he omitted the word 'execute.' Mr. Obama now repeated the chief justice’s initial error of putting 'faithfully' at the end of the phrase. Starting where he had abruptly paused, he said: 'the office of the president of the United States faithfully.” ("I Do Solemnly Swear…(Line, Please?," NY Times, Jan. 20, 2009)

Yes, indeed these two "smooth-talking constitutional experts" couldn't manage to recite the brief oath as it was written. This was largely Chief Justice Roberts' fault. We can believe that this flub was due to human fallibility and that may very well be the case, or we can also wonder whether the very intelligent Chief Justice deliberately mishandled the oath so that it would be administered a second time, under very different circumstances.

Here's how the media reported the second rite: ...After a day’s worth of chatter over whether the president had been properly sworn into office...(i)n 25 seconds, President Obama became president again. Chief Justice John G. Roberts Jr. re-administered the oath to Mr. Obama on Wednesday evening, one day after the two men stumbled over each other’s words during the inauguration ceremony at the Capitol. For their do-over, the two men convened in the White House Map Room at 7:35 p.m. for a brief proceeding that was not announced until it was completed successfully...Only hours after aides told reporters there was no reason to administer the oath again, they concluded it was easier to do it on the first day, rather than have someone challenge the legitimacy of his presidency...Mr. Obama raised his right hand and did not use a Bible....only nine people witnessed the do-over. There were four aides, four reporters and a White House photographer..." (NY Times, Jan. 22, 2009).

This second-time-around doppelganger oath was the real oath, since the flawed first one, done in the sight of millions and upon the Bible of assassinated President Abraham Lincoln was a "challenge (to) the legitimacy of his presidency..."

There was no Bible the second time and with Obama having been compared to John F. Kennedy during the campaign, and with all of the macabre parallels between Kennedy and Lincoln (Lincoln was killed in Ford's theatre, Kennedy was killed in a Ford automobile; Lincoln's secretary was named Kennedy, Kennedy's secretary was named Lincoln; Lincoln and Kennedy were both succeeded by vice-presidents named Johnson, etc.), I'm not sure that if I were Barack Obama I would have wanted to step into the middle of such a highly charged symbol palimpsest -- unless of course the first inaugural oath-taking was little more more than shadow-play.

What appears to be the authentic inauguration took place in a basement, and was an elite rather than a populist rite, with just nine witnesses. It occurred in former President Franklin Roosevelt's secretive, war-era "map room." Before FDR, under presidents from Chester Arthur through Wilson and Coolidge, it was reputedly used to play the game of billiards.

The omission of the Bible is not invalidating since the father of our country did not use one at his inauguration and Lyndon Johnson, on the plane to Washington after's Kennedy's killing, used a Roman Catholic mass book ("missal"), rather than a Bible. Hence, the absence of a Bible per se does not invalidate the oath, but the peek-a-boo nature of the inaugural Bible may be deliberate, in that its momentous presence at the botched inauguration is all the more glaring in its inexplicable absence at the real inauguration.

If symbolism is a language, what is being signaled by this apparently deliberate omission?

Another equally striking aspect of the second oath are the photographs of the ceremony, which feature the looming presence of a vintage portrait above the mantle on the wall behind the president and the chief justice.
The oath is a ritual and this ritual has an icon hovering over it, as if by way of spiritual benediction and patronage. As of this writing, in all the prominent photos of the second oath which this writer has seen, no caption has been provided by the establishment media that identifies the enigmatic man in the portrait. Yet, symbolically, he is the "genius loci," the presiding spirit of the authentic inaugural ceremony of Barack Obama as President. Like the omission of the Bible after so much was made of its presence at the first oath-taking, the omission of any identification of the figure in the painting at the second oath-taking would seem to be significant.

Let us recall that the second oath was performed in secret: "...the two men convened in the White House Map Room at 7:35 p.m. for a brief proceeding that was not announced until it was completed..."

In Freemasonry the god of the secret societies is covertly substituted for the One True God. This false god is identified in the masonic lodges as "the Great Architect."

The mysterious man in the portrait who silently presides over the authentic inauguration of Barack Obama as Commander and Chief, is Benjamin Latrobe, the great architect of the U.S. Capitol.

The Joint Chiefs of Staff HAVE AN ABSOLUTE CONSTITUTIONAL DUTY to stand behind Guantanamo Military Judge James Pohl UNTIL OBAMA OVERCOMES “RES IPSA LOQUITUR” BY SUPPLYING HIS LONG FORM BIRTH CERTIFICATE AND PROVING HIS ELIGIBILITY TO BE PRESIDENT UNDER ARTICLE 2 OF THE US CONSTITUTION.