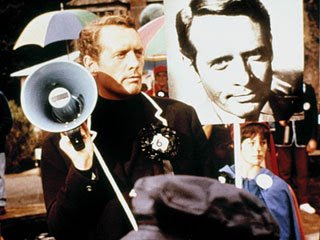 Patrick McGoohan, the man who embodied hope over despair in the coolest way imaginable in the 1960s cult TV classic The Prisoner, has died--he was 80 years old.

The Prisoner was a British TV series that aired in America starting in 1967. Only 17 episodes long, The Prisoner was a strikingly original show about a former British spy who wakes one morning to find himself in a psychedelic fantasy-land that's not all candy and sunshine--it's a combination British village/futuristic prison, and McGoohan's character was stripped of his identity and known only as "Number Six." McGoohan (who'd starred in an earlier spy show, Danger Man, which was titled Secret Agent in the U.S.) had the rugged good looks and clipped accent that leant The Prisoner a gravity its giddy alternate-worldliness might otherwise have lacked. Number Six's famous cry, "I am not a number, I am a free man!" became both a counterculture catchphrase as well as an anguished plea for freedom. The Prisoner was James Bond for acid-heads, and McGoohan's straitlaced image made his small-screen version of a hip spy all the more appealing.

McGoohan also appeared in many films, from Ice Station Zebra to Braveheart, but for TV fans, he'll always be The Prisoner.
Posted by Robalini at Sunday, January 18, 2009

Email ThisBlogThis!Share to TwitterShare to FacebookShare to Pinterest
Labels: Patrick McGoohan, The Prisoner