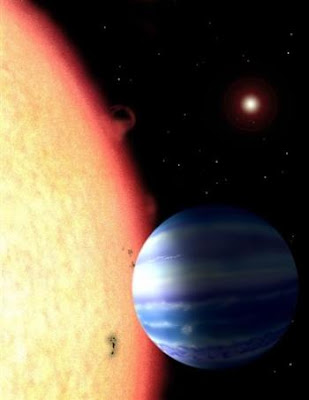 Two independent groups of astronomers have detected the atmospheres of planets around other stars from ground-based telescopes.

Previous observations of the atmospheres of extrasolar planets had been made almost entirely by space-based instruments, such as the Hubble and Spitzer space telescopes, although another team last year detected the signature of sodium in an exoplanet atmosphere.

To date, astronomers have detected several key gases in planets' atmospheres, including:

Carbon dioxide – a potential sign of life, though the planet where the gas was observed was too hot to be habitable.

Water vapor – a key molecule required to support life as we know it.

Silicates (combinations of silicon and oxygen) – components of most rocks on Earth, likely in the form of clouds of dust grains on massive exoplanets.

Sodium – detected in 2001, it marked the first space-based observation of an exoplanet atmosphere.

Ground-based detection is becoming a priority as Hubble ages and Spitzer is set to run out of cryogens, which keep its instruments cool enough to detect infrared radiation (heat), limiting its abilities.

"Others have tried to detect planetary atmospheres from Earth, but to no avail," said the co-author of one of the new studies, Mercedes López-Morales of the Carnegie Institution in Washington, D.C. "We hit it right two nights last summer."

López-Morales and her team observed the planet OGLE-TR056b, a so-called "hot Jupiter."

Hot Jupiters are massive gaseous planets that orbit very close to their stars, whipping around them in two to three days. Their proximity to their parent stars indicates the planets are hot enough to emit radiation in the optical and near-infrared wavelengths and that their radiation is detectable from Earth.

But OGLE-TR056b is faint, sitting about 5,000 light-years away and in a crowded part of the night sky, located in the direction of the center of our galaxy from the Earth's perspective. So López-Morales and her colleagues used the European Southern Observatory's Very Large Telescope (on July 2) and Carnegie's Magellan-Baade telescope (on Aug. 3). Both telescopes are located in Chile.

Only about one out of every 3,000 photons from the star comes from the planet itself. The rest is from the overwhelming light of the star. So astronomers wait until the planet is eclipsed as it orbits behind the star (from the Earth's perspective), which allows for separation of the emissions of the planet from those of the star.

"The planet is glowing red-hot like a kitchen stove burner, but we had to know precisely when the eclipse was going to happen and measure the stellar flux very accurately so it could be removed to reveal the planet's thermal emissions," said lead author of the study David Sing of Institut d'Astrophysique de Paris.

The team took more than 600 images of OGLE-TR056b with both telescopes. The planet is hotter than any detected by Spitzer so far — its atmosphere is more than 4,400 degrees Fahrenheit (2,400 degrees Celsius).

The observations also indicated that the planet has little to no cloud cover and a static atmosphere with little circulation, López-Morales told SPACE.com in an email.

Their work will be detailed in an upcoming issue of the journal Astronomy & Astrophysics.

In the same issue of the journal, a Dutch team will explain their detection of the thermal emission in the near-infrared of another exoplanet dubbed TrES-3b. Its atmosphere registered at about 3,000 F (1,700 C).
Posted by Robalini at Sunday, January 18, 2009

Email ThisBlogThis!Share to TwitterShare to FacebookShare to Pinterest
Labels: Exoplanet