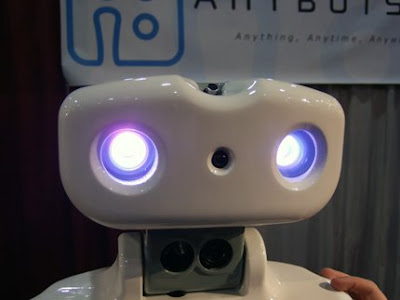 Las Vegas– Every year, we hope for the best. We prowl the tiny neighborhood of robotics-related booths here at the Consumer Electronics Show in Las Vegas, dutifully covering the various models aspiring to be the next Roomba (while looking and performing suspiciously similar to it) and DIY kits for making your own 12-in.-high breakdancing humanoid robots. This time around, there was a $6000 fuzzy baby seal that stands in for traditional animal therapy, batting its eyes at you and responding to petting. There was also the Automower from Husqvarna, essentially a giant Roomba that autonomously cuts grass. Unless iRobot introduces a new model, the Robotics Techzone is usually a complete disappointment, another reminder of the fragile, early state of the consumer robotics market.

But this year, for the first time, a robot showed up with all the eerie promise and engineering rigor that’s been missing from this corner of the convention. The QA from Anybots is a humanoid robot with no arms, that balances, Segway-like, on two wheels. It’s designed for telepresence, giving off-site users a physical, mobile presence during meetings, factory tours or inspections. When a user is logged on to the QA, it’s LED eyes light up. If more than one person is speaking through the robot, the eyes switch back and forth between each user’s designated eye color. When the QA is driven around, it autonomously steers itself around obstacles, using a bottom-mounted LIDAR (or laser radar) sensor along with its neck-mounted visible/infrared camera. It also has a green laser pointer, allowing users to point out something on a whiteboard or factory floor, something that Anybots engineers claim is a surprisingly common necessity during telepresence situations.

The market for this robot is, admittedly, limited. It costs around $30,000 at the moment, putting it in the reach of a select few corporate customers with regular telepresence needs. Or, as Anybots hopes, maybe a tech-savvy company like Google will simply think it’s too cool not to try. But whether anyone actually buys the QA, it’s an inspiring piece of technology, from a company that’s already made news for its research into humanoid walking robots. The QA, says Anybots, is a stripped-down bot, intended to help make companies comfortable with the idea of having robots around the workplace, and paving the way for more sophisticated models, such as ones with arms.

The QA is impressive in its own right, a 50-pound robot with a sleek, androgynous humanoid design and enough self-balancing algorithms to keep itself upright after we shoved it across the both. Anybots hopes to eventually bring the price down as low as $5,000, but the real goal is that quasi-philosophical acceptance of workplace robots, in this case as a surrogate for off-site employees. If there’s enough customer demand for arms, Anybots could apply its ongoing research into hydraulic limbs in follow-up models. For now, this is the closest CES has ever come to the heady potential of robotics as inspirational technology. Whether it sells or not, or ushers in a wave of ambitious, sophisticated robots, the QA’s most important job for the moment is to stand there, and look as cool as a robot should.