“The United States of Tara” 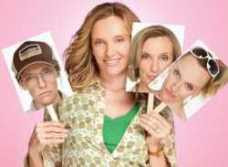 “The United States of Tara” a triumph for Toni Collette
Smallscreen Reviews
Collette plays Tara, a married mother of two who has Dissociative Identity Disorder (D.I.D.), and it makes for an interesting home life.
By April MacIntyre
Jan 18, 2009

Showtime’s latest series “The United States of Tara” is a tour de force for Toni Collette, whose deft chameleon acting is nothing short of some of the finest work she has ever done, and Collette has done a lot of fine work.

Collette plays Tara, a married mother of two who has Dissociative Identity Disorder (D.I.D.), and it makes for an interesting home life. 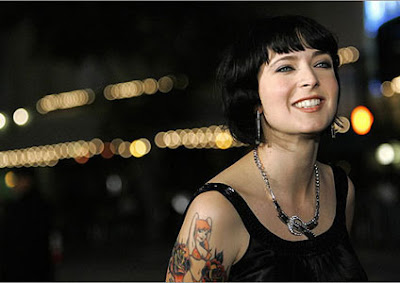 The wholly original series is the latest from the Oscar winning screenwriter Diablo Cody (Juno) and Steven Spielberg is executive producing for Showtime.

Caveat for those tuning in: It took me until the end of the second episode before I was hook, line and sinker for the odd dramedy that also features the fine work of John Corbett (Sex and the City) and Patton Oswalt.

There’s a kegger in Tara’s brain, as she tries to describe the feeling of being taken over by three distinct personalities: There's "T," a mouthy hormone-raging teen; Buck, a titty bar and beer lovin’ trucker and Vietnam vet and Alice, a tidy homage to June Cleaver and the Stepford Wives who is a scratch baker and seems to have been plucked from the 1950’s. Her only shade of lipstick is Revlon’s retro “Fire and Ice.”

The severity of Tara’s problem is an artful dance and dodge for her family to explain to others, to navigate personally and especially for Tara, who wearies of being torn from herself when her stress kicks her into an “alter” and she effectively loses a day or three.

Cody’s dialogue is distinctly recognizable. She mashes pop culture references in her patent weaving of snark and slag for most all the characters. Collette is a shoe-in for an Emmy nomination for Best actress. Corbett is engaging as her loving husband Max and Oswalt shines in his role as Corbett’s landscaping partner. Tara’s teenage daughter Kate (Brie Larson) and her genius teen son (with an impending reveal) is Marshall (Keir Gilchrist) and both do an excellent turn in their roles. Tara's sister Charmaine (Rosemarie DeWitt) is a wild card, and may cause havoc in Tara’s marriage down the road.

There is nothing like it on television, and the quality of Collette’s acting combined with Cody’s writing make this show one to watch.

Apparently Showtime doesn't want to know the REAL facts about DID, and what a person who has DID struggles with on an hourly basis. I feel insulted to have received an obvious "form email letter" in response to my heartfelt email to Showtime. What I saw in the first episode, is that Mr. Spielberg is using "sex, sex, and more sex", to sell a series.

At least with the massive number of anti-Tara emails that Showtime obviously has received from DID sufferers, they have included an "informative" video from Dr. Kluft; however, even in his short documentary, he did not address the magnitude of the horrific childhood sexual abuse that causes Dissociative Identity Disorder. The so called "consultant" that the writer, Diablo Cody is conferring with, had DDNOS, not DID. Apples and oranges... sigh.

Imagine for a moment, if you can: A new Showtime series called, "The Deformed State of Tara" - a COMEDY about a girl who confronts comedic situations in her every day life revolving around her dealing with her inability to climb stairs, her sexual encounters, and her comedic experiences with people staring at her scarred and deformed face and arms. (As a child, her parents had physically abused her so intensely, that her repeatedly broken bones resulted in a leg amputation, and the repeated burns the parents inflicted on her arms and face resulted in grotesque scarring which made her face appear as almost inhuman.)

Although this show is funny, it does not fully portray what life is like living with a mother who has DID. I am the second oldest of six children, born to a mother diagnosed with DID, and I have written a book about my experiences with her. My agent is currently soliciting the manuscript to publishers. If you are interested in knowing more about what life is really like living with a mother with DID, please go to my blog and read the first two chapters of the book "Mother Had A Secret", http://motherhadasecret.blogspot.com. Don't forget to include your comments.

I don't understand how you can believe that a show based on a disorder cause by childhood rape and torture could be "FUNNY". I have DID. I know personally what it's like. I believe that it it wrong for people to try to make money from misrepresentative portrayals of a disorder cause from babies being raped.

First I will say that DID is no joke and should be taken seriously. But TV is TV after all the show is not claiming to be fact based. I think that this show will make people want to learn more about mental illness and perhaps open peoples minds to be more accepting of psychology and the related disorders.

Yes, TV is TV... however, in considering what causes DID, it is brutal to make fun of our resulting disorder with such over the top portrayals. This show will only create more stigma for us. That is our concern.

Yes, living with D.I.D can be a horror. So can a lot of things. I've been living with it for over 40 years and if I have learned anything it is this: humor heals.
Sitting around whining about everything doesn't. That may sound harsh but I've been involved in enough D.I.D. on-line communities to see who actually heals and makes a life for themselves and who just gets stuck living in constant pain.
Just because "Tara" is not to your liking or does not portray how you choose to deal with things does not mean it doesn't have merit for some people. Just because we are D.I.D. doesn't mean we are cut from the same cloth. I do not believe this show does more harm than good.
I believe it is a responsible, if watered down, attempt to teach the public about something that is highly misunderstood.

We do not agree with this year BRIT awards 2010 decision.

Lady Gaga can not be better than Nina Hagen

Do you have a burning question we could ask all the stars at The BRIT Awards?