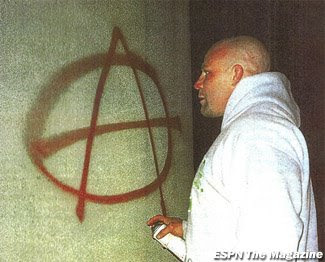 Thu Jan 15, 2009
Jeff Monson charged with mischief; ESPN not an accomplice
By Maggie Hendricks
Jeff Monson is either really dumb or really smart. I'm leaning towards the latter.

The fighter, who last appeared in the Mixed Fighting Alliance, winning over Ricco Rodriguez in December, has a warrant against him for defacing the Capitol building in Olympia, Wash. This warrant was issued after pictures of him painting an anarchist symbol on the building appeared in ESPN the Magazine.

See, Monson is an outspoken anarchist. He has said many times that he wants to do away with the social hierarchies that govern our world. The best way for Monson to share these theories is through the mass media, so publicity is his friend.

Is Monson so dumb that he would expect ESPN to not use photographs of him committing a crime? Of course not. This is a man with a Master's degree in psychology. He understands the ramifications of civil disobedience. If he didn't want attention brought to his cause, he would have asked ESPN to photograph him sitting at home, enjoying dinner.

Monson was charged with first-degree malicious mischief, a crime that carries a maximum penalty of a $20,000 fine and 10 years in prison. ESPN did not do him a favor by running that picture, but it's not their job to protect athletes. It's their job to cover them, a fact which Monson has used to make sure that everyone is discussing his cause today.
Posted by Robalini at Sunday, January 25, 2009

Email ThisBlogThis!Share to TwitterShare to FacebookShare to Pinterest
Labels: ESPN