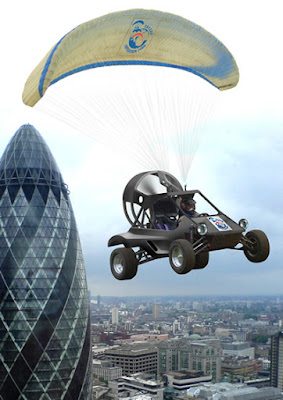 Story Highlights
Flying car takes off from London to Timbuktu, Mali, in West Africa
Skycar is road-legal all-terrain buggy with rear propeller and fabric wing~
Trip is through France, Spain and Morocco, then Western Sahara to Timbuktu 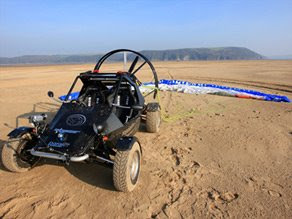 LONDON, England (CNN) -- From the noisy and lovable Chitty Chitty Bang Bang to the time-traveling DeLorean in "Back to the Future," flying cars have been a fixture of movies and science fiction that never quite cut it in the real world -- until now.

The Skycar's fabric wing is folded and packed in the back of the car when driving on the road.

A flying car devised by a British inventor and a team of engineers took off from London on Wednesday on an epic journey to Timbuktu, Mali, in West Africa -- a trip they hope will prove the fantasy has become reality.

The "Skycar" is a road-legal all-terrain buggy with a huge rear propeller and a fabric wing, the result of 18 months of design and research.

"We started with a car rather than starting with an aircraft and made a car into an aircraft," said Skycar's creator, Giles Cardozo. "It's a really exciting piece of kit to drive but of course, it also flies."

The Skycar's 3,720-mile (6,000-kilometer) trip will take it through France, Spain and Morocco, then the Western Sahara, Mauritania and Mali to the famously isolated city of Timbuktu.

Its design gives it the performance of a motorbike while also allowing it to fly over impassable terrain and the sand seas of the Sahara, the designers said. They hope to fly over the Straits of Gibraltar.

In propeller mode, the engine makes a lot of noise. The two-person seat is a tight fit with room for a driver and a passenger who controls the car in flight.

Experienced adventurer Neil Laughton is the designated pilot of the craft on its epic journey.

"I'm a bit nervous, but that's what adventure and exploration's all about," Laughton told CNN. Watch as flying car takes off »

Although some eccentric-looking flying cars have been attempted before, Cardozo and his team of engineers say advances in flexible wing technology have made their car more practical, with more precise handling and increased safety over traditional rigid wings.

The flexible wing is folded and packed in the back of the car when driving on the road and can deploy immediately when it is ready to fly.

He admits the Skycar has trouble in high wind or turbulence, but it has some safety measures.

"It will be easier and safer to fly than any other aircraft, as it has no pitch control and (is) therefore impossible to stall or dive," the inventors say. "Should the engine fail, the pilot would simply glide down into the nearest field or strip of sandy desert. In the event of catastrophic wing failure, car connection system failure or mid-air collision, an emergency ballistic reserve parachute can be deployed."

The expedition hopes to help out some charities along the way, and if it is successful the car's creators hope to market it commercially.

"If people see the fun in this and it catches on, I think it could be a great fun toy," Cardozo said. "It's not your everyday means of transport by any means, but it's a great, fun alternative way of getting around -- like a quad bike, like a Jet Ski, like anything like that."

Cardozo hopes his "toy" will arrive in Timbuktu by late February, proving that flying cars aren't just the stuff of movies or children's stories anymore. 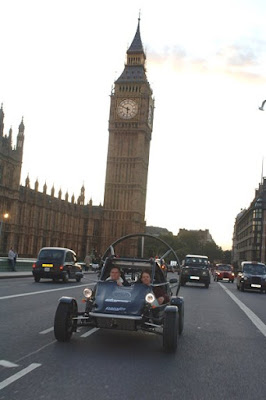