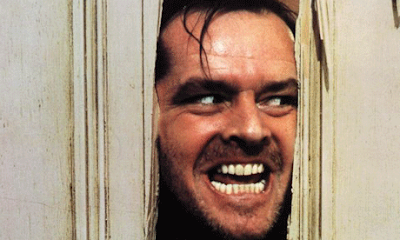 A Stephen King fan has published an 80-page version of the book which novelist Jack Torrance obsessively writes during King's The Shining, where his descent into madness is revealed when his wife discovers that his work consists of just one phrase, endlessly repeated.

Torrance, played by Jack Nicholson in terrifying form in Stanley Kubrick's 1980 film, is a frustrated writer who goes with his wife and son to spend the winter in the isolated Overlook Hotel in an attempt to get the novel he has always wanted to write started. But the hotel's grisly past and unquiet ghosts have their way with him, and his wife Wendy eventually finds that the manuscript he has been working on actually only contains the phrase "All work and no play makes Jack a dull boy", typed over and over again.

Now New York artist Phil Buehler, who describes himself as "a big fan of Stanley Kubrick and Stephen King", has self-published a book credited to Torrance, repeating the phrase throughout but formatting each page differently, using the words to create different shapes from zigzags to spirals.

"The idea has probably been marinating for years, because I loved the movie and the Stephen King book," said Buehler. "I'd just finished my own obsessive art project [and] it was an idea I had over the Christmas holidays."

He said he decided to stick to type and formatting that could have been created on a typewriter, with the first ten pages duplicating shots of Torrance's work from the film. "I thought 'if he continues to get crazier, what would those pages look like?'" he said. "I hit writer's block about 60 pages in, and I had to get to 80 - that went on for about a week." His fiancée, who had neither read the book nor seen the film, became a little concerned about his actions. "I finally showed her the movie, and she realised I wasn't really losing it," said Buehler.

He's included a spoof review from the blog OverThinkingIt.com on the book's back jacket, which compares it to "the best of Beckett" in its "lack of forward momentum", and considers the struggles of the author, "heroically pitting himself against the Sisyphusean sentence". "It's that metatextual struggle of Man vs. Typewriter that gives this book its spellbinding power," the review says. "Some will dismiss it as simplistic; that's like dismissing a Pollack canvas as mere splatters of paint."

So far, Buehler says that around 1,000 people have viewed the book, for sale on Blurb.com for $8.95 in paperback, or $22.95 in hardback, and he's sold "a few" copies, with sales now starting to pick up steam. "A few people have asked me to sign it - they're looking it as a piece of art rather than a funny thing to give to a Kubrick fan," he said. "If you're not a Kubrick or King fan, you might not even get it."
Posted by Robalini at Sunday, January 25, 2009