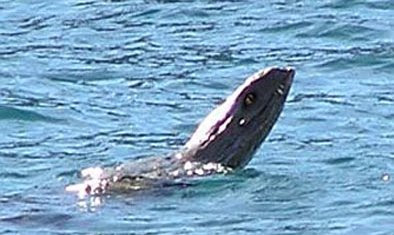 A new image of the head and neck of an alleged Lake Monster of Argentina is worthy of a viewing here. What could it be?

A Spanish language (Infobae) item on the Nahuelito image was published late last year, accompanying the above photograph. My translation of the text, more or less, via robot and common sense, reads:

A man sent this photograph to a newspaper of Bariloche and planted a new seed of doubt about the existence of this mythical animal. This time, the image was captured in Mascardi Lake.

The image published in the Matutinal Rionegrino the Cordillerano shows an animal similar to a serpent that shows itself on the surface of the water.

“I thought that they were huillines [river otters], when I saw it diving under the water, but when she showed [again] I was surprised. It looked little like any other animal that I had seen before, and I was scared by its presence when it appeared,” related the reader who sent the photography to the newspaper.

For the aware, this could be a test of the existence of the “Nahuelito.”

But for the skeptical ones, it is only a trunk floating in the water.

It is an unknown aquatic creature, who, according to the popular belief, lives in Nahuel Huapi Lake in Argentina.

The legend goes back to indigenous stories and the first registered sighting dates back to 1910, when George Garret recorded he saw “about 400 meters distance away a creature whose visible part measured between 5 and 7 meters in length and excelled about two meters out of the water.”

In 1897, the credible Dr. Onelli, director of the Zoological Park of Buenos Aires, began to receive sporadic information about a strange creature that inhabited the Lagos patagónicos and organized an expedition in search of it. The search did not obtain any positive results.

More recently, in 1960, the Argentina Navy encountered in the lake an unidentified submarine object for 18 days, without being able to identify it.

The most popular hypothesis is that the prehistoric monster, “Nahuelito,” is a survivor of the time of the dinosaurs, probably a “plesiosaur.”

Please see my and Patrick Huyghe’s lake monster field guide, on pages 119-121 and 294-295, for more on the history of the sightings of Nahuelito.

The question remains, what does the above photograph show? A turtle does not have teeth, right? Is it a swimming lizard? An otter? Yes, an otter? A log with painted eyes and teeth? Some other kind of fake? What could it be?

The two photographs of Nahuelito, allegedly taken on April 15, 2006, are below: 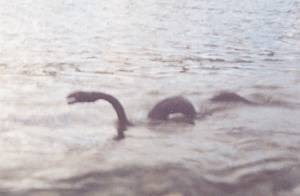 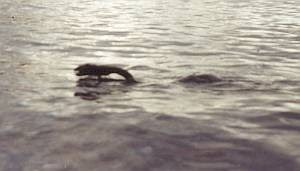 Tip of the hat to Above Top Secret for bringing this 2008 image to our attention.
Posted by Robalini at Wednesday, January 21, 2009