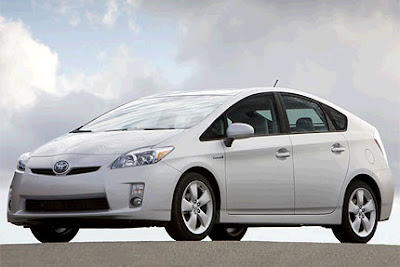 It certainly is a sign of our times when an all-new 2010 Toyota Prius is the most anticipated car to be unveiled at the Detroit Auto Show. But its true. With unstable fuel prices and a growing consciousness about our environment, the Prius has more mass appeal than anyone could have imagined when Toyota launched the original first-gen model way back in 1997. Since then, Toyota has sold more than 670,000 in the U.S. And we predict this third generation Prius will be the most successful yet.

Let's start with the fuel economy. Toyota doesn't have solid EPA figures yet, but they say the new Prius should hit 50 mpg combined. If true, that means the Prius will likely be the most fuel-efficient car sold in North America. The Prius rides on an all-new platform, which Toyota says will improve the car's handling and quietness thanks to revised bushings, more caster angle and an improved stabilizer-bar arrangement. However, like before, this new Prius uses struts up front and a beam axle in the rear. Disc brakes are now at each corner and combine with a new regenerative braking system. The new Prius should be a more refined car too, thanks to improved sound insulation to quell vibration and road noise.

Under the hood, a 1.8-liter Atkinson-cycle four cylinder replaces the current car's 1.5-liter unit and generates 98 hp and 105 lb-ft of torque. When combined with the new hybrid system, the horsepower swells to 134. Toyota says that the larger engine actually helps fuel economy, since the increased torque allows it to operate at lower revs on the highway. That newfound torque also helps the Prius reach 60 mph in an estimated 9.8 seconds—about a second quicker than before. A new electric water pump and a new EGR system aid engine efficiency.

Aerodynamics has played a large role in helping the new Prius reach 50 mpg. In fact, Toyota says, with its .25 Cd, the Prius has the cleanest aero profile of any vehicle in the world. Though the overall height of the car remains the same, designers moved the top of the roof 3.9 in. back. And that solves an issue we've had with the current Prius—it's pointy roof profile. The new Prius looks much sharper. It rides on the same size wheelbase as the outgoing model and is only slightly longer. But there's more cargo room, and the seatbacks were sculpted to provide more rear seat legroom.

Inside, there's a new dash design and a few new tricks, too. The new touch sensor system on the steering wheel, called "Touch Tracer" switches, is designed to reduce driver eye movement. Images of the switches and their positions are shown on the instrument panel directly in front of the driver. Toyota has used plant-derived, carbon-neutral plastics, known as "ecological plastic," in the seat cushion foam, cowl side trim, inner and outer scuff plate and on the deck trim cover. Options will include Dynamic Radar Cruise Control, a next-gen intelligent parking system, a backup monitor, a voice activated nav system and a sunroof equipped with solar panels that power a ventilation system to helps keep the cabin cool. Cool, indeed. The new Prius goes on sale this spring. No word yet on when exactly we might see a lithium-ion battery pack or plug-in capability.