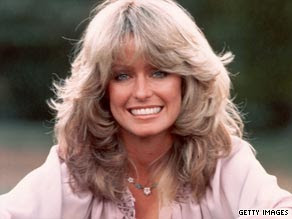 Farrah Fawcett, sex symbol and actress, dies
Story Highlights
Farrah Fawcett was known for iconic 1970s poster, role in "Charlie's Angels"
Actress was hailed for performance in TV movie "The Burning Bed"
Fawcett had cancer and made TV documentary about her battle

(CNN) -- Farrah Fawcett, the blonde-maned actress whose best-selling poster and "Charlie's Angels" stardom made her one of the most famous faces in the world, died Thursday. She was 62.

Fawcett's death was confirmed by Paul Bloch, one of her representatives at Rogers and Cowan, an entertainment public relations firm.

Bloch told CNN that Ryan O'Neal, Fawcett's romantic partner since the mid-1980s, and her friend Alana Stewart were with Fawcett at Saint John's Hospital in Santa Monica, California, when she died. Gallery: The life of Farrah Fawcett »

"Although this is an extremely difficult time for her family and friends, we take comfort in the beautiful times that we shared with Farrah over the years and the knowledge that her life brought joy to so many people around the world," O'Neal said in a written statement. Read more tributes to Fawcett

The young man, who is currently with a chaplain, has spoken with his father, Whitmore said.

Ryan O'Neal had recently told People magazine that the sex symbol was declining.

"She stays in bed now. The doctors see that she is comfortable. Farrah is on IVs, but some of that is for nourishment. The treatment has pretty much ended," he said in a story posted May 7.

Fawcett's cancer journey has been documented in a television special partly shot by the actress. Fawcett began shooting "Farrah's Story," by taking a camera to a doctor's appointment. Eventually, the film expanded to include trips overseas in hopes of treating the cancer.

The documentary aired on NBC on May 15.

Fawcett's beauty -- her gleaming smile was printed on millions of posters -- initially made her famous. But she later established herself as a serious actress. She starred as a battered wife in the 1984 TV movie "The Burning Bed." She appeared on stage as a woman who extracts vengeance from a would-be rapist in William Mastrosimone's play "Extremities.

To many, Fawcett will always be best known for her red-swimsuited image on the pinup poster, which sold a reputed 12 million copies after its release in 1976.

Fawcett was a model best known for bit parts, commercials and as "Six Million Dollar Man" actor Lee Majors' wife when she shot the poster in early 1976 at the behest of Pro Arts, a Cleveland, Ohio, company.

Photographer Bruce McBroom placed Fawcett -- then known as Farrah Fawcett-Majors -- in the Indian blanket-draped front seat of his 1937 Chevy and snapped away. Fawcett did her own hair -- a long, tousled cascade of blonde locks -- picked out the red bathing suit and chose the frame later used for the poster, according to a story in the Toronto Star.

The poster, with Fawcett's million-dollar smile front and center, became a sensation.

Soon after the photo shoot, Fawcett was asked to join the cast of a new Aaron Spelling TV show, "Charlie's Angels," about a trio of female detectives who work for a mysterious man named Charlie, whose only appearance in the show was through his voice (supplied by John Forsythe). Watch Fawcett talk about why she left "Angels" »

Fawcett, who played Jill Munroe, was the last to be cast. Co-star Kate Jackson was the known name at the time, but thanks to her poster, Fawcett became the breakout star.

The highly rated TV series kicked off what came to be known as "jiggle TV," series full of pretty actresses who appeared in bikinis at the drop of a hat.

"Denunciations of 'massage parlor television' and 'voyeurism' only brought more viewers to the screen, to see what the controversy was about," wrote Tim Brooks and Earle Marsh about "Charlie's Angels" in their indispensable reference, "The Complete Directory to Prime Time Network and Cable TV Shows."

ABC's "Three's Company" and CBS's "The American Girls" were among the shows that immediately followed, and shows such as "Baywatch" owe "Charlie's Angels" a debt.

But Fawcett didn't stay with "Angels" long. At the end of the first season, unhappy with her contract, she left the show and was replaced by Cheryl Ladd.

Fawcett's career stagnated for a time after "Charlie's Angels." She appeared in a handful of forgettable films and divorced Majors.

But her career received a major boost with her starring role in "The Burning Bed," a 1984 TV movie co-starring Paul Le Mat. Fawcett played an abused wife who sets fire to her husband's bed as he lies sleeping. Fawcett received an Emmy nomination for her performance.

Fawcett also became romantically involved with O'Neal around this time. The pair had a son, Redmond, in 1985.

In recent years, Fawcett has appeared sporadically in the public eye. She posed nude for Playboy in 1995. In 1997, she appeared on "The Late Show with David Letterman," an interview that became notorious for Fawcett's apparent incoherence. She later said she was just having fun with Letterman.

She reunited with her "Charlie's Angels" co-stars, Jackson and Jaclyn Smith, for an awards show in 2006.

Fawcett was born in Corpus Christi, Texas, in 1947. She married Majors in 1973; they divorced nine years later.