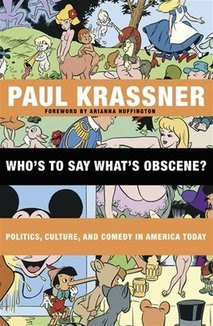 DESERT HOT SPRINGS, Calif. – He was once a child music prodigy and in the decades since, Paul Krassner has been everything from political satirist to author, editor, anarchist and an advocate for both peace and pornography.

But the title he may favor is one he found buried in his FBI file.

"To classify Krassner as a social rebel is far too cute," a letter in the file said in response to a favorable magazine interview with the co-founder of the Yippie Party, the group that notoriously disrupted the 1968 Democratic National Convention in Chicago. "He's a nut, a raving, unconfined nut."

So Krassner titled his autobiography "Confessions of a Raving, Unconfined Nut."

"I figured I might as well make use of it," says the author, smiling broadly as he sits in the living room of his modest tract home in this sandy, sagebrush-dotted corner of the Mojave Desert on a scorchingly hot morning. On a nearby table is a copy of "A People's History of the United States of America" by historian and social activist Howard Zinn.

For someone who has lived figuratively on the edge of society for most of his life, Krassner appears to have made the move literally as well, having left Los Angeles' epicenter of counterculture, Venice Beach, several years ago to take up residence in a place where the temperature sometimes hits 120 degrees, accompanied by blast-furnace winds of 70 mph or more.

But the co-founder of the group that once ran a pig for president and tried to disrupt the seat of capitalism by throwing dollar bills onto the trading floor of the New York Stock Exchange, says he has come to love his quiet little piece of Americana with its backyard views of the snowcapped mountains towering over Palm Springs in the distance.

Krassner, who made his debut at Carnegie Hall as a violinist at age 7 (and then almost immediately gave up music because he couldn't get along with his teacher) is 77 now. That's a number he confirms with both a sheepish grin and a faux apology: "I'm sorry, I don't know how that happened."

But if the years are gaining on him, the exuberant, still-youthful-looking rebel never lets on.

Still an unabashed political radical, as well as a prolific writer, Krassner is the author of more than a dozen books. The most recent, "Who's to Say What's Obscene: Politics, Culture and Comedy in America Today," comes out in July.

It takes a skewering look at American politics and morals, speaking generally in favor of such subjects as pornography and recreational drug use and dismissing the torture of prisoners of war as something that is truly obscene. But it goes about it in such a lighthearted fashion as to rarely seem preachy.

"The word that comes to mind when I think of him is integrity," says Robert Scheer, former syndicated columnist and founding editor of the online magazine Truthdig.com. "The guy anguishes over what is right and wrong more than the editors of the most respectable publications. ... He doesn't get it right all the time, but he always thinks it out."

It was Krassner, Scheer says, who gave him his big break as an investigative reporter, providing the money to travel to Vietnam in 1963 to report on covert U.S. involvement in that country's civil war before the United States had become inextricably involved in it. Scheer's story, first published in Krassner's small, groundbreaking satirical magazine, The Realist, was picked up by the mainstream media and gained national attention.

The publisher had raised the money for Scheer's Vietnam trip by selling red, white and blue posters with the word Communism, preceded by another, much more impolite word. The posters quickly became a hit on college dorm room walls.

"It really confused all these conservative types," Scheer recalled with a laugh. "They hated communism" but they also hated seeing it described with a barnyard epithet for sexual intercourse.

That is just one of a seemingly endless chain of stories of practical jokes and other stunts attached to Krassner's name, some of them true, others apocryphal.

One of the latter, says Krassner, is that he came up with the acronym for the Youth International Party by throwing his head back in a moment of psychedelic-inspired bliss and shouting "Yippie!"

"As a journalist, I knew that we had to have a who for the who, what, where, when and why that would symbolize the radicalization of hippies for the media," he says with a mischievous smirk. "So I started going through the alphabet: Bippie, Dippie, Ippie, Sippie. I was about to give up when I came to Yippie."

The movement he helped launch is not remembered fondly by everyone. David Horowitz, the former 1960s radical turned conservative commentator, said that although he likes Krassner personally he believes he and other Yippies must shoulder much of the blame for crises such as AIDS and drug addiction.

"It was one long incitement against America, against all the guidelines, the morals and mores that helped people make it through life," he said of the Yippie movement. "I think Yippies in the end were a terribly destructive force."

Although many of his contemporaries have died or retired, Krassner remains busier than ever. He contributes regularly to the popular blog Huffington Post, and writes columns for the pro-marijuana publication High Times and the online magazine Adult Video News.

A spirited conversationalist and a fierce student of politics and pop culture, he jumps continuously from one subject to the next when he talks, frequently going off on tangents as one interesting idea pops into his head after another.

He does it so often that when he's on a standup comedy tour, as he will be this summer, he'll sometimes appoint a member of the audience to act as his "tangent spotter" and tell him to get back on message and deliver the punch line.

"He doesn't waste time," says his longtime friend Wavy Gravy, the political activist and advocate for charitable causes who usually appears in public dressed as a circus clown. "People who waste time get buried in it. He keeps doing one thing after another."

Married for 21 years and the father of a grown daughter, Krassner is busy writing another book, this one a novel about a comedian who invites censorship but never gets arrested. It was inspired by an old friend, the groundbreaking Lenny Bruce, whose autobiography, "How to Talk Dirty and Influence People," Krassner edited.

At one point, says Krassner, he got so into the project that he began "channeling Lenny," hearing his voice directing him from the grave.

"Until one time he said to me, 'Come on, you don't even believe that,'" he says, punctuating the statement with an expletive and a loud, raucous laugh.
Posted by Robalini at Monday, June 29, 2009