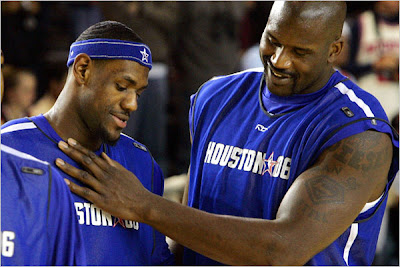 For the third time in four years, Shaquille O’Neal is on the move, rumbling across the N.B.A. landscape, forcing adjustments, reassessments and revisions from coast to coast.

The Cleveland Cavaliers, in a bold stroke aimed at winning the championship, acquired O’Neal from the Phoenix Suns, in a multiplayer trade that will have ramifications across the league.

O’Neal, a 15-time All-Star, will join LeBron James, the league’s reigning most valuable player, to form one of the most powerful tandems in the league. The Cavaliers were already an elite team — winning an N.B.A.-best 66 games last season — but one that was missing any star power, or reliable scoring, beyond James.

That will no longer be a problem. Even at 37, O’Neal remains a fearsome threat in the low post. He averaged 17.8 points and 8.4 rebounds for the Suns last season, played in 75 games — his highest total in four years — and was named to the all-N.B.A. third team.

With O’Neal, Cleveland now has an answer to Orlando’s Dwight Howard, who bulldozed through the Cavaliers in the Eastern Conference finals.

James’s championship dreams were crushed in Game 6 of that series, and he left the arena in a deep funk, without congratulating the Magic or speaking to the news media.

The depression that settled over Cleveland in late May has now cleared.

The Suns and Cavaliers had been discussing parameters of a deal since before the February trading deadline. At the time, it was deemed too great a risk by the Cavaliers, given their dominant season and their enviable chemistry. What appeared like a gamble then looks essential now.

Although the Suns initially held out for a better package, they settled for a deal that gives them financial relief, and little else. Phoenix will receive two marginal rotation players, the past-his-prime center Ben Wallace and the swingman Sasha Pavlovic, plus $500,000 and a future second-round pick.

If the Suns waive Pavlovic, whose contract is only partially guaranteed, they can save around $9 million in salary and luxury-tax payments. They could save millions more if Wallace decides to retire and accept a buyout, a possibility he has entertained.

Where that leaves the Suns is unclear. They have been dangling Amare Stoudemire, their other All-Star big man, in trade discussions all year. Their All-Star point guard, Steve Nash, is entering the last year of his contract and has been notably disconcerted by the team’s direction.

Once a perennial contender in the West, Phoenix has traded away three essential players — O’Neal, Boris Diaw and Raja Bell — since December. They traded Shawn Marion, once a core player, 16 months ago, in the deal for O’Neal.

If the Suns embark on a wholesale rebuilding effort, Stoudemire and Nash could be the next to go. Nash has openly entertained the idea of reuniting with Knicks Coach Mike D’Antoni — with whom he had his best years in Phoenix — if not via trade then as a free agent in 2010.

The trade also has implications for Orlando and the Boston Celtics, the last two Eastern Conference champions, who will now be revisiting their defensive schemes to cope with O’Neal, the most dominant big man of his era, and James, perhaps the best all-around player in the league.

“It’s a great move for Cleveland,” said D’Antoni, who coached O’Neal for a half-season in Phoenix, “and I think that Shaq being closer to New York, playing four times against us, it’s not good for us.”

Although O’Neal is not the powerhouse he was earlier in the decade, when he led the Los Angeles Lakers to three straight titles, “he’s still one of the better players in the league,” D’Antoni said.

The trade could reverberate right into next summer. James is expected to become a free agent in July 2010. At least a dozen teams — including the Knicks — have been clearing salary-cap space to pursue James, Dwyane Wade and Chris Bosh, among others.

If O’Neal, who won titles with Kobe Bryant in Los Angeles and Wade in Miami — can help James secure his first ring, it will make it harder for James to leave his home state. At a minimum, the Cavaliers’ owner, Dan Gilbert, and General Manager Danny Ferry have again demonstrated to James that they will go to great lengths to win a title and keep James happy.

The Cavaliers will be O’Neal’s fifth team in his 17-year career, and his fourth since 2004, when the Lakers traded him to Miami. He has been partners with some of the best perimeter players of the modern era, including Bryant, Wade and Penny Hardaway. Now O’Neal will wind down his career next to one of the most talented players in N.B.A. history.

In Cleveland, James is known as the Chosen One and the fans as “witnesses.” O’Neal will now be the most significant face in the crowd, The Big Witness.
Posted by Robalini at Monday, June 29, 2009