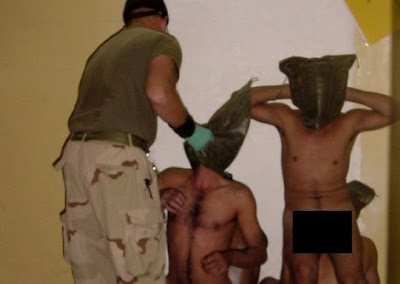 The real reason behind Obama’s reversal of a decision to release the torture photos has been almost completely ignored by the corporate media - the fact that the photos show both US and Iraqi soldiers raping teenage boys in front of their mothers.

The Obama administration originally intended to release photos depicting torture and abuse of detainees in Afghanistan and Iraq by the end of May, following a court order arising out of a Freedom of Information Act lawsuit first filed by the ACLU in 2004.

However, a reversal of Obama’s decision was announced this week, after he “changed his mind after viewing some of the images and hearing warnings from his generals in Iraq and in Afghanistan that such a move would endanger US troops deployed there,” according to a Washington Post report.

In response, the ACLU charged that Obama “has essentially become complicit with the torture that was rampant during the Bush years by being complicit in its coverup.” The Obama administration has also sought to protect intelligence officials involved in torture from prosecution at every turn.

The primary reason why Obama is now blocking the release of the photos is that some of the pictures, as well as video recordings, show prison guards sodomizing young boys in front of their mothers, both with objects as well as physical rape.

This horrific detail has been almost completely ignored by the establishment media in their coverage of the story this week, despite the fact that it’s been in the public domain for nearly five years, after it was first revealed by investigative Seymour Hersh during an ACLU conference in July 2004.

“Some of the worst things that happened you don’t know about, okay?” said Hersh. “Videos, there are women there. Some of you may have read that they were passing letters out, communications out to their men. This is at Abu Ghraib … The women were passing messages out saying ‘Please come and kill me, because of what’s happened’ and basically what happened is that those women who were arrested with young boys, children in cases that have been recorded. The boys were sodomized with the cameras rolling. And the worst above all of that is the soundtrack of the boys shrieking that your government has. They are in total terror. It’s going to come out.”

Hersh’s contention that minors were raped by prison guards while others filmed the vulgar spectacle is backed up by a leaked Abu Ghraib memorandum highlighted in a 2004 London Guardian report, in which detainees Kasim Hilas describes “the rape of an Iraqi boy by a man in uniform”. The testimony was also part of the military’s official Taguba Report into the torture at Abu Ghraib.

“I saw [name blacked out] fucking a kid, his age would be about 15-18 years. The kid was hurting very bad and they covered all the doors with sheets. Then when I heard the screaming I climbed the door because on top it wasn’t covered and I saw [blacked out], who was wearing the military uniform putting his dick in the little kid’s ass,” Mr Hilas told military investigators. “I couldn’t see the face of the kid because his face wasn’t in front of the door. And the female soldier was taking pictures.”

“They came with two boys naked and they were cuffed together face to face and Grainer [Corporal Charles Graner, one of the military policemen facing court martial] was beating them and a group of guards were watching and taking pictures from top and bottom and there was three female soldiers laughing at the prisoners,” he said.

A 2004 London Telegraph report also described photos which showed “US soldiers beating an Iraqi prisoner nearly to death and having sex with a female PoW,” as well as a videotape, apparently made by US personnel, which shows “Iraqi guards raping young boys”.

Former Governor Jesse Ventura today offered a solution to the controversy surrounding President Obama’s decision to reverse an earlier promise to release the torture photos - let Ventura see the photos on behalf of the American people and then decide if they should be released.

Ventura told the Alex Jones Show today, “How about if I step forward on behalf of the taxpayers and the citizens of the great United States of America - and I wanna go public with this - I will represent us, let me go where these photos are, let me go inside and see them and let me come out and report back as to what these photos are.”

“I think I have the right to do that, I think they have no right to keep me from doing that, you know why? I pay their salaries and I’m a governor, I’m a mayor, I’m a former Navy SEAL, I had a top secret security clearance - I think I’m fully qualified to walk in and view these photos,” said Ventura, adding, “I’ll report to the public, what it is why we shouldn’t be able to see them because I understand it could infuriate the enemy, but I’m not the enemy and therefore I think I have every right to see these photos in private.”
Posted by Robalini at Wednesday, June 03, 2009

I understand that these prisoners are locked up for doing damage but that's not reason to torture!