Why Silvio Berlusconi is the world's coolest leader 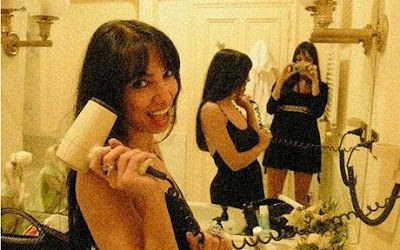 Why Silvio Berlusconi is the world's coolest leader...

Wives of G8 leaders urged to boycott summit over 'sexist' Berlusconi
The wives of world leaders who are due to attend the G8 summit in Italy next month have been urged to boycott the event in protest over Silvio Berlusconi's "offensive" attitude to women.
By Nick Squires in Rome
23 Jun 2009

Photo: Lucia Rossini and Barbara Montereale (rt) taking photographs of each other in what they claimed was a bathroom at Silvo Berlusconi's private residence in Rome in 2008

Three Italian female academics are calling on Gordon Brown's wife, Sarah, President Obama's wife, Michele and other leaders' spouses not to attend the gathering in L'Aquila, which will be hosted by the Italian prime minister.

The academics have written an open "Appeal to the First Ladies" and said they were appalled, "as citizens of Italy and Europe", by the attitude displayed towards women by Mr Berlusconi, 72, who is engulfed in scandal over his private life.

They were "profoundly indignant" over his treatment of women "both in public and in private," they said.

In the past two months he has been accused of "consorting with minors" by his wife, Veronica Lario, of having an inappropriate relationship with an 18-year-old underwear model and of sleeping with a high-class call-girl during a private party at his residence in Rome in November.

A businessman acquaintance of the prime minister is being investigated by police and prosecutors in Bari, southern Italy, on suspicion of "abetting prostitution" by allegedly supplying escorts to parties thrown by Mr Berlusconi at his mansion in Rome and his villa in Sardinia.

The academics accused the prime minister of sexism over plans drawn up by his party, People of Freedom, to promote actresses, a former Big Brother contestant and a Miss Italy model as candidates for the European Parliament elections earlier this month. The proposal was later shelved after Mr Berlusconi's wife called it "shamelessly trashy".