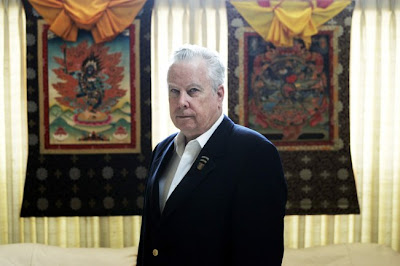 National Defense:
Hollywood’s attention unwelcome
Retired colonel expects film to give short shrift to military’s exploration of the paranormal
Retired Col. John Alexander of Las Vegas is loosely the basis for a character played by George Clooney in the upcoming movie “The Men Who Stare at Goats.”
By Joe Schoenmann
Mon, Jun 15, 2009

George Clooney portrays a character loosely based on Las Vegas resident John Alexander in a movie coming out this year. But being played by a Hollywood heartthrob isn’t enough to make the retired Army colonel happy with the film.

Alexander’s 32-year military career included a stint as an intelligence officer with an “X Files” mission: exploring the use of psychokinesis and psychic abilities to create better soldiers and enhance intelligence collection.

The movie, “The Men Who Stare at Goats,” is based on a book with the same title, a reference to a belief that some military researchers were experimenting with the use of the mind to kill or injure goats.

Alexander criticizes the 2004 book as “5 percent true and the rest extrapolated beyond belief.”

The movie, expected to be released in December, is being described as a “dark comedy.”

Moviegoers will likely see, for instance, a scene in which the commanding general of the Army’s Intelligence and Security Command tries to walk through a wall.

But for Alexander the areas the book touches upon — psychokinesis and psychic spying, or remote viewing — are no laughing matter.

“Reality is of no interest” to Hollywood, Alexander complains.

Exploring the mind’s potential has long drawn the interest of military and intelligence organizations. Much of the military’s experimentation with remote viewing has been declassified, and many of those who say they were involved in it have written books or been interviewed about it. In fact, many of those people will meet Friday through Sunday at Green Valley Ranch Station Casino for the 10th Anniversary Convention of the International Remote Viewing Association.

Las Vegas is home to many retired military and intelligence officers, but Alexander, 71, said that isn’t why the conference is held here. It started here because Las Vegas is convenient for everyone to fly into, and it has become tradition.

Alexander moved to Las Vegas in 1995 to be closer to Robert Bigelow, the millionaire founder of Budget Suites of America. Bigelow used some of his fortune to found the National Institute of Discovery Science, devoted to the study of the paranormal and UFOs.

Las Vegas is the retired colonel’s base for frequent travels around the world. As a senior fellow for the Joint Special Operations University at the U.S. Air Force’s Hurlburt Field in Florida’s panhandle, he conducts studies and writes position papers.

His books include “Future War: Non-Lethal Weapons in Twenty-First Century Warfare,” and “Winning the War: Advanced Weapons, Strategies and Concepts for the Post-9/11 World.”

In a September, he’ll make a presentation based on his essay, “Africa: Irregular Warfare on the Dark Continent,” to the Las Vegas chapter of the Association of Former Intelligence Officers at Nellis Air Force Base.

At this week’s convention, Alexander will be the only the only Las Vegas-based presenter, though he is hardly the only person in the area familiar with remote viewing.

A few years ago, remote viewing lessons were available from a woman in Boulder City. (This month she is giving talks about astral travel and telepathy at Aura Sutra, a shop that sells aromatherapy candles and other such wares.)

Alexander uses a sports analogy to explain that while everyone can probably do remote viewing, some can do it better than others.

“I can run all I want, but I’m never going to break a 4-minute mile. But some will. I see it as there are superstars in every endeavor, from art to athletics to science, and the same is true of remote viewing.”

It has been widely reported that in the 1970s, the U.S. Army actively sought psychic superstars to spy on the Russians. Over the next 20 years, the “Star Gate” program was developed with the Defense Intelligence Agency, the CIA and other governmental entities involved. The program was disbanded in the mid-1990s, Alexander said, because budgets were tighter and for a host of other possible reasons.

“There is a contingent who think it was so good that it must have gone ‘deep black ops,’?” or was erased from public and governmental view while secretly kept alive, Alexander said. “I argue that’s not the case because the talent pool is small and everybody knows each other.”

In the scores of books about remote viewing, some of the same declassified examples are brought up time and again as evidence of its effectiveness.

Paul Smith, a retired Army major who spent seven years with the Star Gate program, wrote in his 2005 book, “Reading the Enemy’s Mind,” about the discovery of a massive hangar near the Baltic Sea in the northern Soviet Union. A remote viewer was asked to investigate.

Psychic spy Joe McMoneagle described and drew a double-hulled submarine “bigger by a significant factor than any other submarine known to man.”

It also had missile tubes “in front of the conning tower ... (which) ran contrary to known submarine design standards.”

Smith wrote that analysts thought McMoneagle’s data “made no sense.” But months later, Smith noted, satellite photos confirming McMoneagle’s “viewing” as a Typhoon-class submarine, the largest in the world, were revealed.

“While scientists argued about the viability of any theory supporting remote viewing, U.S. Army intelligence was already employing it on successful operations,” Alexander contends.

Another question the scientists pondered was: Where does a remote viewer pull the information from?

Steven Schwartz, 67, one of the earliest proponents of remote viewing and one of the scheduled speakers at the upcoming conference, says “it’s rather like a daydream. It’s a part of your consciousness that you have available to you all the time. There’s nothing weird about it. It’s not rare. We call it a woman’s intuition, a man’s gut hunch.”

The problem is that remote viewing “has become enmeshed in occultism, supernaturalism ... but this is really just normal human functioning,” Schwartz said before launching into what sounds like a sales pitch: “It can make CEOs so much more successful. It can make investors better. It has many applications.”

If that’s the case, say critics such as Ray Hyman, University of Oregon psychology professor emeritus, then where are all the people who got rich using psychic abilities to, oh say, win big in Las Vegas? Where is the evidence?

Hyman was hired by the CIA in the mid-1990s to look at more than 20 years of remote viewing data to determine whether it works and whether it’s practical.

Hyman said no to both.

“It’s a matter of evidence and data,” Hyman says. “The evidence has never been very good.”

“And unfortunately, I spent a lot of my time debunking parapsychology.”

Believers in remote viewing, he said, “know it must be true but it’s very frustrating that their evidence will never withstand scientific scrutiny. As long as you don’t have good scientific control, it all looks good.”

Alexander says the real life examples abound. In Vietnam, for example, every platoon had one soldier who seemed to have an ability to sense danger before the platoon was attacked.

Alexander is convinced that what remote viewers do, or sense, is related to shamanism and near-death experiences. Shamans, whom he has studied all over the world, might tap into an information stream when they enter herb-induced trances that allow them to find game or locate enemies.

“Now to be able to quantify and make that a trainable skill and understand some of the premises behind it,” Alexander said. “That would be very valuable.”