'Beavis and Butt-head' Back on MTV, To Bring Music Videos with Them 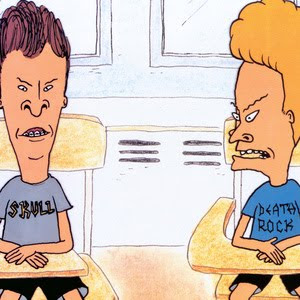 'Beavis and Butt-head' Back on MTV, To Bring Music Videos with Them
Wednesday, July 14, 2010
Meghan Carlson
Senior Writer, BuddyTV

It's official: We can add Beavis and Butt-head to the list of resurrected TV cartoon comedies, alongside the recently revived Futurama and Family Guy.

The news that MTV and Mike Judge are planning all-new adventures for our two favorite stupid slackers is exciting, because the show was awesome, but also surprising, given that B and B got canceled all the way back in 1997.

Why the revival, 13 years, a King of the Hill, one Office Space and an Extract later? If the New York Post is to be believed, the sheer quality of Judge's Beavis and Butt-head work, and the promise of nostalgia-ratings (and it IS a promise, at least from me), aren't the only reasons MTV is bringing the high-school anti-heroes back to life. The move is also a means of returning to the network's roots:

"The return of Beavis and Butt-head will be a backdoor means for MTV to return to showing music videos -- something the network was founded upon but abandoned in the last decade to make room for popular reality shows like Laguna Beach, The Hills and Jersey Shore."

Music? On the Music Television Network? No. WAY!

Neither MTV nor Judge is spilling much about the new Beavis and Butt-head episodes, but we do know this: When B and B return, the metal-loving goons will still be in high school, but instead of lampooning 90's pop culture and bands, they'll "lob their snarky comments at more current targets like Lady Gaga."

Does that mean they'll trade in their Metallica and AC/DC t-shirts for a couple of more topical logos? We hope not. We want a revival, not a total revamping. You better not be a bunch of bungholes about this, MTV.

Stray thought that may haunt me all day: If they can so easily taunt Radiohead, what will the boys say about the likes of Justin Bieber and Glee?!
Posted by Robalini at Thursday, July 29, 2010

Email ThisBlogThis!Share to TwitterShare to FacebookShare to Pinterest
Labels: King of the Hill, Mike Judge, MTV