The Lasagna Sandwich from Tesco: The LAS-andwich 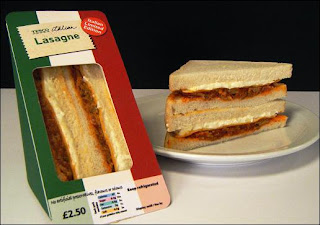 More from the frontiers of sandwich innovation — the foot-long hamburger is so totally yesterday's news, the the Candwich last week's! — this time from the British grocery store chain Tesco with their newest creation: the LAS-andwich. That's right, for a mere £2.50 (about $3.80), you can acquire your very own personal-sized lasagna that is also a sandwich. Inspired by leftover lasagna (seriously), the LAS-andwich consists of beef in a tomato herb sauce, cooked sheets of pasta, and "a creamy cheddar, ricotta and mayonnaise dressing." That's right: bread and pasta. Not since the Domino's Bread Bowl Pastas have consumers seen so many carbohydrates in one snack.

Although we've never heard of lasagna sandwiches, LAS-andwich creator Laura Fagan says, "Lasagne sandwiches were a favorite of mine back in student days and were really popular with all my mates at university." So maybe they're popular in the UK, which would make them a little bit less innovative, but still pretty crazy nonetheless.

Tesco is not new to the novelty sandwich game: they produced a Singing Sandwich for the World cup which sang soccer chants when the packaging was opened, and a banana and chocolate sandwich for Christmas two years ago.

Novelty Sandwich Ranking: On a scale of one to ten, one being a plain slice of white bread and ten being a chocolate-dipped bacon-wrapped Double Down on a stick, the LAS-Sandwich is a 6.
Posted by Robalini at Thursday, July 29, 2010

Email ThisBlogThis!Share to TwitterShare to FacebookShare to Pinterest
Labels: Sandwich