The Candwich: A Sandwich in a Can 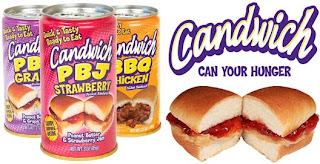 The Candwich: A Sandwich in a Can
Thursday, July 8, 2010
Paula Forbes

Like a cross between a Little Debbie and a cold Hot Pocket, but also in a can, the Candwich is the next batshit crazy convenience food hitting shelves. Although it's targeting the pre-school, camping, and construction worker demographic, it seems more like a novelty or a military ration than something anyone would actually eat on a regular basis. The Candwich recently got national attention after a Utah man was sued by the SEC for fraudulently investing millions of dollars in Mark One Foods, the company the produces the Candwich, in addition to several other equally ridiculous products.

The Candwich comes in three flavors: peanut butter and strawberry jam, peanut butter and grape jam, and, the most terrifying of all, BBQ Chicken. Apparently the law suit has had little impact on Mark One Foods, and plans for Pepperoni Pizza and French Toast Candwiches are in the works.

The Mark One Foods website makes a claim that the Candwich would be good for camping, and, indeed, a German camping supply company at one point produced cheeseburgers in a can. An AV Club taste test described them as something you would "never want to relive, but that won't stop me from telling every single person I know about it." Although peanut butter and jelly seems like it might fare better from the in-a-can treatment than either the cheeseburger or the BBQ Chicken, it's still likely that the Candwich is more an internet-meme-in-a-can than viable food source.

And, unfortunately, there is more: the yellow circle on the left side of the can says "Candy Surprise Inside." Not clear whether the candy is in the sandwich itself or a bonus side item, but either way there should be no surprises in a sandwich in a can.
Posted by Robalini at Thursday, July 29, 2010

Email ThisBlogThis!Share to TwitterShare to FacebookShare to Pinterest
Labels: Candwich