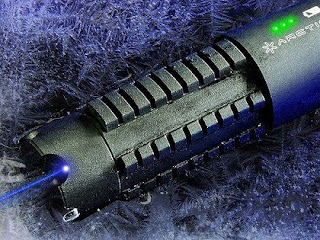 Star Wars creator George Lucas is trying to stop a company from making a high-powered laser that bloggers around the world have dubbed "a real-life lightsaber".

His company, Lucasfilm, has theatened legal action against Shanghai-based Wicked Lasers if it does not change or stop producing the Spyder III Pro Arctic Laser, which is 4000 per cent more powerful than a standard laser and capable of causing permanent blindness.

In a cease-and-desist letter, obtained by CNN, Lucasfilm argued that the Pro Arctic Laser "was intended to resemble the hilts of our lightsaber swords, which are protected by copyright". It calls the laser a "highly dangerous product" that can blind and burn people and damage property.

The letter referred to media reports describing the laser as a "lightsaber", which it said made it clear that the public was being led to believe that the product was "an official lightsaber device".

But Steve Liu, chief executive officer of Wicked Lasers, told CNN his company had been marketing similar products for years and had never itself compared them to the Jedi weapon wielded by characters in the Star Wars films.

"Most people feel it's kind of ridiculous," he said, adding that he had not yet changed the lasers or stopped selling them.

"We would never use any comparison like that to Star Wars or a lightsaber or anything like that."

The $230 laser is marketed mainly to industrial and research customers but anyone can order one from the company's website. Wicked Lasers describes the product on its website as "the most dangerous laser ever created".

Australian Customs and Border Protection has said it has found a steep increase in the importing of lasers in the past year and that anyone caught importing one as powerful as this faces a maximum penalty of $110,000. The regulations were designed to prevent laser attacks on commercial aircraft.
Posted by Robalini at Sunday, July 25, 2010