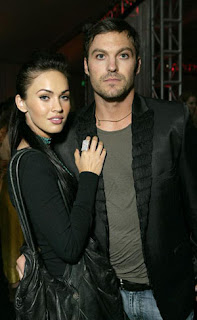 In honor of Playboy's new site, here's the best article from it's opening day...

In which we examine the life and career of phenomenally mediocre men who have managed to land women infinitely hotter and far more successful.

Brian Austin Green began dating Megan Fox in 2004, when her career consisted of guest turns on Two and a Half Men and uncredited extra work. Green was the bigger star, and so, their relationship, while clearly unusual, was nothing extraordinary.

But as Fox’s career skyrocketed with Transformers and Jennifer’s Body, Green’s kept scraping rock-bottom. Yet on June 24, the pair finally tied the knot (after two engagements and Megan losing a massive diamond ring). No viable explanation has yet been found.

Green’s star turn came on ’90s phenomenon Beverly Hills, 90210 where he played the hopeless homeboy David Silver: a kind of Vanilla Ice-manque, perpetually clad in baggy jeans and sporting some form of Jew-fro fade, Brian Austin Green was the least cool cast member of an already epically uncool cast. Sample his work on the show and reel in horror. (Keep in mind, this isn’t community access—this is from a highly-rated, near seminal, network television show.)

Green has also appeared in such films as Combat Sheep, Unwed Father and Laws of Deception (directed by Joey Travolta).

Much like Drake, who quickly shed the insipid kiddie shit of Degrassi to became one of the hottest names in hip-hop, Green…Green is nothing like Drake. He did, however, release a rap album, 1996’s One Stop Carnival. We have not managed to listen to this auditory horseman of the apocalypse in full, but we do trust AllMusic when they call the album a “lock for the short list of worst rap records ever made.”

Let’s take a look at a sample lyric, from the single “You Send Me.”

I’m takin’ love from the bottom of my heart
And wrappin’ it well, then watchin’ it sail thru the parks
I’m tired of bein’ a human being in the dark
Capsizin’ like the lonely man’s ark
From dip to dip, my eyes fantasize ’bout the thighs

From lip to lip, autumn love fell from my eyes
Thinkin’ about the prize I let slip on by
Suddenly wringin’ out these “why?”s that won’t come dry
She’s got the style and finesse that’s
Far from sleazy, easy casual sex acts

Clearly there are no answers to be found in Green’s career, only more questions. Perhaps the answer lies in Megan Fox.

Possible Explanations for the Relationship

Fox has proven herself to be batshit crazy on more than one occasion.

There is little to be learned here: Clearly the whim of celebrity is a pathology unto itself.
Posted by Robalini at Friday, July 30, 2010