A Duo of Chupacabras in Texas? 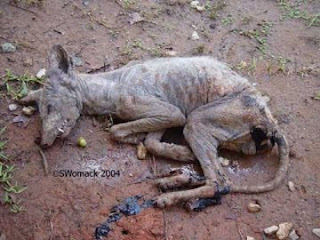 Were they simply dogs too ugly to be believed, or something more dire and fearsome? A pair of animals mere miles apart has folks abuzz about the legendary chupacabra.

Folks in and around Hood County, Texas are scratching their heads and wondering: What in tarnation are these critters that have recently turned up? Are they simply a pair of seriously ugly dogs?

Or has something more sinister and fearful fallen upon their towns?

We learn by way of Yahoo's The Buzz Log that animal control officer Frank Hackett was recently called to an unusual duty. As News Provider reports, a local rancher spotted the ugly creature, and Hackett shot and killed the loose and reportedly menacing and potentially dangerous animal.

A close inspection of the animal's remains has locals wondering if what they have on hand is an honest-to-goodness chupacabra.

The word chupacabra, which translates to "goat sucker," was coined by Puerto Rican comedian-businessman Silverio Perez to describe a 1995 event involving eight sheep that were found dead, all of which were completely drained of blood and bearing similar puncture wounds in their chests.

A fearful creature of legendary status was born, and word of his mythic malevolence rapidly spread beyond Puerto Rico throughout the Americas. Reports of chupacabra sightings have come in from places as distant and different as Maine and Chile. Many have taken an interest in the beast and in gathering reports of strange sightings thought to be of the fearsome beast that is believed to feed on the blood of livestock.

Adding to the tension and heightened attention in Texas is the fact that the current example is just one of two very similar and very strange sightings. Just a few miles away, a second animal was shot and killed. It too is doglike, hairless and homely.

As Buzz Log writes, Hackett is holding off on judging the discovery as proof of the mythic creature, opting to wait until DNA analytical results make their way back from the laboratory. What he will say for now, though, is that whatever that thing is, or was, "it wasn't normal."
Posted by Robalini at Thursday, July 29, 2010