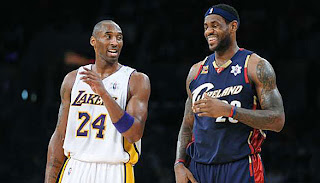 LeBron's Heat, not Lakers, now the Vegas pick to win NBA title
Miami, with James joining Dwyane Wade and Chris Bosh, passes the L.A. as the favorite, but Lakers past and present aren't exactly conceding the championship.
Mike Bresnahan and Broderick Turner
July 8, 2010

The Lakers are still the team to beat, winners of two consecutive NBA championships.

Or is there a new king of the league?

LeBron James' decision to join Dwyane Wade and Chris Bosh on the Miami Heat grabbed hold of a sporting nation Thursday night, but did it shift the balance of basketball power from Southern California to South Beach?

The Lakers see it one way, the Heat surely see it another, and Las Vegas has its own unique view, no surprise.

Miami passed the Lakers as favorites to win the championship after James' announcement, according to Jay Rood, race and sports book director for MGM Resorts International.

The Lakers were 2-1 favorites before James' decree, but they slipped to 11-5 afterward, based on general wagering. The Heat took a huge leap from second choice at 7-2 to the favorite at 8-5 not long after James proclaimed that Miami provided "the best opportunity to win and win now and into the future."

Past and present members of the Lakers weren't quite ready to give the crown to James.

"They still need help," said former Lakers guard Ron Harper. "They need a center. They need help off the bench. Ain't nobody going to hand the Heat the championship just because they got LeBron James. I still think the Lakers are the team to beat.

"Look, Miami has got 2½ great players. Bosh, he's all right. Don't get me wrong, he's a good player. But he's not as great as Wade and LeBron."

Lakers forward Ron Artest, who has been lighting up his Twitter feed with numerous daily dispatches on a variety of topics, was relatively silent when he heard the news.

"No comment on it," he said in a text to The Times. "Fish is bigger news to me."

That would be free-agent guard Derek Fisher, who is engaged in slow-moving contract talks with the Lakers.

To Lakers assistant coach Jim Cleamons, James' decision shows that the six-time All-Star feels he needs help to win a title, even if it means playing on a team with an inordinate, if not imbalanced, amount of top-rate talent.

One thing's almost a guarantee: Miami and the Lakers playing on Christmas Day. Even so, the Lakers and Heat are better off than at least one team.

"He just set Cleveland back 10 years," said Harper, who grew up in Dayton, Ohio. "That's my state and I feel for all them folks."