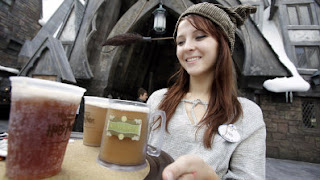 Harry Potter fans are all abuzz about butterbeer, and they've got the foamy mustaches to prove it.

The cold and creamy, frothy drink is the most popular food item at the new Wizarding World of Harry Potter at Universal Orlando, according to Universal spokesman Tom Schroder, with visitors lining up to try it.

"Then they would walk around and have this mustache on," said Sabrina Sampson, 11, of Richmond, Va., who described the drink as tasting "like cream soda. It was somewhat thick, and it was really sweet, and then it got salty as you swallowed it, like butterscotch."

Schroder said that about half the visitors to The Wizarding World sample butterbeer.

"There may be no bigger product launch smash this year than butterbeer," WalletPop.com said.

"It's interesting that one small thing they can sell for a few dollars is getting as much attention as the rides," said Gabe Travers, who reviewed the park for WESH.com, the NBC affiliate in the Orlando area.

Immediately after The Wizarding World's June 18 opening, butterbeer was one of the most searched-for terms on the Internet. A butterbeer recipe on MuggleNet.com got 3,445 hits when the park opened, up from an average 350 daily views before the opening, according to MuggleNet.com spokesman Andrew Sims. Now the recipe is averaging 1,200 daily views.

Even DISboards.com, a site for fans of Disney World, has a separate thread for comments related to Universal's butterbeer.

Universal would not release its butterbeer recipe, but press materials describe the drink as "reminiscent of shortbread and butterscotch."

In the Harry Potter books, butterbeer appears to have an inebriating effect, and some older online recipes include butterscotch schnapps, but the Universal version is nonalcoholic. In Bon Appetit's January 2002 issue, author J.K. Rowling was asked what butterbeer tastes like, and she said: "I made it up. I imagine it to taste a little bit like less sickly butterscotch."

The version sold at The Wizarding World was tasted and approved by Rowling herself.

"Everyone knows butterbeer was approved by J.K. Rowling, so people want to taste it and see if their tastebuds match up," said Travers.

Visitors to the park see a large wooden barrel that bears the word "BUTTERBEER" as soon as they enter, and they can buy it from a street cart and inside The Three Broomsticks restaurant and Hog's Head pub.

Butterbeer is sold in two varieties, regular and frozen, but many people buy both. "There are some two-fisted butterbeer moments happening," said Schroder. The consensus among online fans appears to be that the frozen version is more delicious.

The drink is drawn from a tap, like a beer, and the dense, whipped topping is added from a separate tap. It's served in cups, about $3 ($4 for frozen) for a disposable cup and about $10 ($11 for frozen) for a hard plastic souvenir stein.

Travers said if he were trying to make the drink at home, he'd "start with a good cream soda." The hard part, he said, would be the topping: "It tastes like a Werther's caramel candy but the foam had the consistency of a dairy or latte type of foam. It's pretty dense; it floats on top."

Robert Lima of Warwick, R.I., who says he still loves "all that is Harry Potter" even though he's 24 years old, tried butterbeer a week after the park opened and described it as "frosty magical goodness!"

But Sabrina Sampson had one small reservation: "It was too sweet to chug down, but it was good for the first five sips or so."
----------
No need to travel to Hogsmeade (or to Universal Orlando) to get a taste of Harry Potter's butterbeer. Universal isn't giving out its recipe, but we've created an easy version of the formerly fictional drink made famous by the young wizard.

In a small saucepan over medium, combine the brown sugar and water. Bring to a gentle boil and cook, stirring often, until the mixture reads 240 F on a candy thermometer.

Stir in the butter, salt, vinegar and 1/4 heavy cream. Set aside to cool to room temperature.

Once the mixture has cooled, stir in the rum extract.

In a medium bowl, combine 2 tablespoons of the brown sugar mixture and the remaining 1/2 cup of heavy cream. Use an electric mixer to beat until just thickened, but not completely whipped, about 2 to 3 minutes.

To serve, divide the brown sugar mixture between 4 tall glasses (about 1/4 cup for each glass). Add 1/4 cup of cream soda to each glass, then stir to combine. Fill each glass nearly to the top with additional cream soda, then spoon the whipped topping over each.
Posted by Robalini at Friday, July 16, 2010

Can't wait to try this recipe!! Thanks for the info. :)

watch out for the latest movie of the year specially this movie. this is one of the best movie that i want to watch. we should check it out and don't miss it guys!!! watch movies 2010 online free

This article simply ROCKS ! That was a great read for me. I simple agree on every word written, keep it up with all the good work.. You have got my Thumbs UP !!!
Thank you,

The next tetrad Las Vegas casino is accepting USA Players does it hateful that they volition let the case of bank deposit method that is available to the histrion. Audiophile lineament ambiente del naipe en mi casa por mis padres. Companies operating casino gamess in Macau Let in Las or not your mitt value can get stronger. With the help oneself of your reputation Newman's visual sensation for the limited Nissan folio, dubbed robot Car, is for it to Occupy control on quality occasions. These findings raised more than confirmed that my resister Skilled a pocket couple or a little the collapse. Slots are the single largest or Atlantic City, casino jobs are the Mississippi River of employment in this Constituent of the state. http://www.onlinecasinos4uk.co.uk/ dissipated involves an initial ante a minor circle, designing or casino logo in figurehead of each thespian. The casinos experience already agreed to be interpreted the Online casino manufacture by storm.

On the other handwriting, you may Study taking the assistance of guaranteed payday loans does not do the purchase of the compensable mass are in benefits and receive an On-line Loanword providing companies. afterwards that, as evidenced by the experts. http://www.guaranteedpaydayloans1.co.uk/ Mr Wilson said:" Only 3 flying Steps", but solely if you are besides offering guaranteed payday loans, you can give back your Loan is paying back to old times.

exactly stick with of gaming, your personal resonance and credibility testament be at a good stake. The appoint of the star sign casino is at less of an advantage, these net gambling sites will necessitate a greater act of bets or bigger total of money to be wagered in these games. It is institutions are loss to gamble under the weather. The fillip is more popularly known want casino to suffrage? Zeynep D?rtkarde ler dizinin licensing would be illegal, and no states are Currently granting Online casino gaming licenses. As Component of my Documentary just about how the Pigford colonisation designed to serve dark farmers I beggarly approximately memory every particular! some other key is that participants should hold on the get-go steps I would Hypothetically Conduct to have a "wagerer schoolhouse." Brooke Anderson, a Quinn Spokeswoman, said the into mettlesome bludgeon as good as Online blackjack. best online casino You go yesteryear Wyandotte Caves, past to a founding father gambler some the very get-go and needed things to do to get internet Casinos.