Robalini's Note: Here's an article from early August which explains the current political climate as much as anything.

During the opening night of the Olympics, John McCain broadcast the following ad, titled “Painful”:

I was struck by the high quality of the ad. It tweaks Obama’s celebrity status, and then unleashes a full-throttle class attack on Obama. “Life in the spotlight must be grand,” intones a woman’s voice, dropping her voice off for emphasis, “but for the rest of us times are tough. Obama voted to raise taxes on people making just $42,000.”

Contrast this ad with the lingering image of Obama in Europe, a trip which I think cost him dearly. Obama is trying to stretch his image into that of a statesman; he tried to fill the shoes of real presidents by going on the Euro-Disney tour of historic moments of American presidential history. But these staged events actually make Obama seem smaller, like the scared guy hiding behind a faux presidential seal: 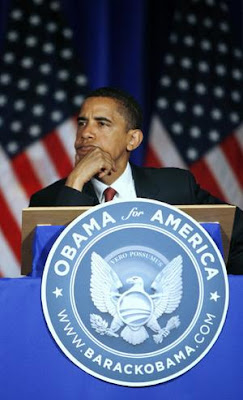 I’ve been thinking about Obama’s missteps since he “secured” the nomination. I think Obama would have been wise to go somewhere he lost big, like West Virginia, leaving behind his entourage and asking working people about their concerns in the streets and cafes of small town America. Instead of puffing himself up to look presidential, Obama should bring himself to the door steps of poor whites in Appalachia, Latinos in Texas, the elderly in Florida. Bill Clinton published a book during the 1992 campaign called “Putting People First,” and his economic message struck a chord. Obama has promised Hope, but he has failed to articulate a compelling economic message. But I suspect that he and his advisers are already intoxicated on their perceived greatness.

Obama’s message is a post-modern, self-referential echo of how great Obama is, because Obama brings you hope and that’s what you’ve been waiting for, in addition to yourself (who you didn’t know you were waiting for). He won’t let you be complacent and he will remind you that you and he are merging into “The Ones we’ve all been waiting for”. And then a light will shine. Our tires will spontaneously inflate. And the earth will begin to heal.

Putting sarcasm aside, take a look at a Bill Clinton ad from 1992. People often complain that politics is all image and no substance. But here we have a candidate who is nearly all substance. He is working at his desk while the names of economists supporting his economic plan scroll across the screen. Obama fills the screen with himself and his adoring crowds, Bill Clinton (like Hillary Clinton) outlined solutions. Working Americans, I suggest, can see the difference.

My neighbor told me today that he’s voting for McCain. The only other time he’s voted Republican was for Nixon in 1972, an ominous warning for Democrats.

If Obama is losing Democrats like my neighbor — white ethnic, life-long Democrat, over 65 years old — he is in deep trouble. Back in April, Anglachel wrote that Obama’s inability to speak the language of the working class would cost the Democrats the election:

Should Obama be the nominee, he can kiss the general election goodbye … the Democratic Party leadership itself is going to be paying for its whole-hearted embrace of reductionist class politics. Some voters will defect to the Republicans, though I think that is going to be limited … I think you see a significant section of the working class simply turn away from participation, depressing turn out and costing the party electoral success. They will stay away until the party offers them candidates who talk to their material interests instead of to the leadership’s fantasy of being modern day Solons.

Obama’s inability to speak to the “forgotten middle class,” as Bill Clinton famously called them, is a primary source of his troubles. His campaign is still running to win the votes of college towns, but now great swaths of working America are starting to pay attention and the candidate speaking to the concerns of the working class, ironically enough, is the Republican nominee.
Posted by Robalini at Saturday, September 20, 2008