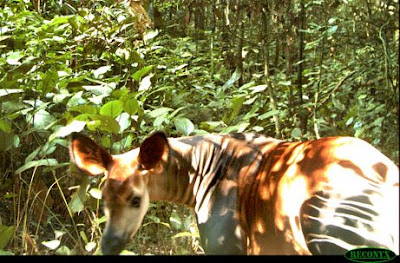 PHOTO IN THE NEWS: Wild Okapi Caught on Film -- A First

September 11, 2008—The okapi—a secretive rain forest animal so elusive it has been compared to the unicorn—has been photographed for the first time in the wild, scientists with the Zoological Society of London reported yesterday.

The giraffe-like mammal with a distinctive zebra-striped rump was caught last month by trip-wire cameras set up in the Democratic Republic of the Congo's Virunga National Park.

The new pictures prove that okapi still inhabit the central African wildlife reserve, despite more than a decade of armed conflict in the region that has been taking its toll on Virunga's wildlife, said the society's conservation program manager Noelle Kumpel.

The total okapi population in Virunga is estimated to be 200 individuals. But a new survey of local bush-meat markets shows that at least one okapi a week is being killed illegally, Kumpel said.

"If the current rate of hunting continues, they could be extinct in two to three years," she added. The global okapi population isn't known, but experts believe that the mammal survives in the wild only in Congo's remote tropical forests, the researcher said.