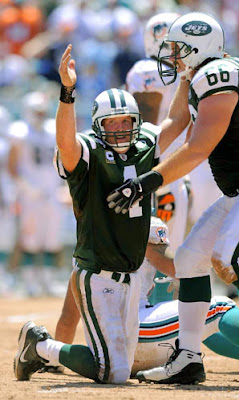 Story Highlights
Despite the win, Favre is clearly still adjusting to the Jets
He made the same kind of plays we've seen him make for years
Favre sounds like he knows that he is still far from his best

Brett Favre made some of his signature throws -- and celebrations -- in his debut.
Bob Rosato/SI

MIAMI GARDENS, Fla. -- After 16 seasons in Green Bay, Brett Favre admits there are still times he walks into the New York Jets huddle and has his mind go blank as he's grasping for the necessary terminology required to make the next call.

Rather than seem indecisive or, worse yet, lost, Favre has already developed a go-to fallback for just such an occurrence.

"A couple of times I just winged it and told the guys, 'Same play,' and then I said, 'OK, ready, break,' '' said Favre after making his Jets regular-season debut at Dolphin Stadium a winning one, 20-14 over Miami. "And they were like, 'Same play what?' ''

Best I can tell from watching on Sunday, it's the same play all right. In every way. The uniform might be a slightly different shade of green, but it's the same old Brett Favre, making the same old Brett Favre-type plays. Some great, some ugly, and some entirely unconventional and ill-advised. Like that 22-yard, fourth-and-13 touchdown pass that Favre lobbed up there to Jets receiver Chansi Stuckey in the second quarter, putting enough air under the ball to invite a fair catch call and just maybe draw a delay of game penalty.

"I didn't think he had a chance in hell of catching it,'' Favre said of Stuckey, who went up for it like it was a jump ball in basketball, pulling it down uncontested a half yard into the end zone. "The throw, I don't know what it looked like. It was like a shot put. I can't believe it went as far as it did. I tried to throw it to where somebody was and just give someone a chance.''

But what we really all walked away with Sunday after watching Favre is the realization that he indeed does give his Jets a chance. A chance to win in the AFC East, especially now that the mighty Patriots might be without reigning NFL MVP Tom Brady. A chance to resurrect head coach Eric Mangini's third-year program, which nosedived to 4-12 last year after such a promising beginning in 2006.

As long as Favre is here, and he's making the same kind of plays we've been watching him make since the first Clinton administration, the Jets are going to believe they have a chance. Let's face it: Ugly as it was at times, this was the biggest victory for a Jets quarterback in Miami since Joe Namath backed up his mouth in Super Bowl III. The Jets-Dolphins haven't meant too much lately, but Favre's presence made this one memorable.

"He has the ability to make some things happen down the field that are impressive,'' said Mangini after getting his initial four-quarter firsthand look at the high-wire act that Favre's game can be at times. "Sometimes the pocket is really firm and he's able to sit back and let it go. And there are times when he creates, and other people have to respond to that creation.''

Favre's first real creation as a Jet came not even seven minutes into the season, when his exquisite play-action fake hoodwinked the Miami defense and gave receiver Jerricho Cotchery time to get behind everyone in the Dolphins secondary while waiting to pull down his 56-yard touchdown reception. That play gave New York the early 7-0 lead and was the biggest play of Favre's 15-of-22, 194-yard passing day.

"I thought I overthrew him, but obviously I didn't,'' Favre said of Cotchery, who had to slow up to catch the ball in stride inside the Miami 10. "He's a deceptive player. He's always around the ball and the guy can make plays. He's got deceptive speed and I hope he keeps deceiving people.''

Listening to Favre in the postgame, I got the sense that he feels like he's deceiving people a bit of late. He knows he's far from at his best, and his struggle to master the offense is wearisome at times. But he's 1-0, and that makes his tortuous unretirement process worth it all. At least for now.

"It was ugly at times, but a win is a win,'' said Favre, who did not throw an interception, lost one of his two fumbles and wound up with those two touchdown passes and a 125.9 passer rating on the day. "I'd be lying if I stood here and told you that I feel confident in the passing offense right now. It's from my end and what I need to study. We made some mistakes that I think were a result of newness. But it's a big win.''

The newness factor, of course, will eventually wear off for Favre. And when it does, his Jets just might find themselves in the thick of things in their division. What a difference 48 hours has made in the AFC East, with Brady going down with a potential season-ending knee injury and the Bills getting Pro Bowl left offensive Jason Peters to finally report back to work.

Everything that we thought we knew when Brady was the one constant in the division now must be recalibrated. And who is better to take advantage of this unexpected opening than Favre and his Jets?

"I just found out about [Brady],'' Favre said. "That's terrible. I guess it's an ACL or something. They've always overcome injuries and things like that, but that's pretty difficult.''

Suddenly we're looking at Favre and the Jets as potentially more than just a nuisance to the feared Patriots. Oh, and did we mention who New York plays in its Week 2 home-opener at Giants Stadium? That would be New England, which overcame its shock on Sunday to squeeze past the Chiefs 17-10 in Foxboro.

Let the Jets handle the Matt Cassel-led Patriots next week, snapping their NFL-record 20-game regular-season winning streak, and Favre-mania will really take off in New York. A Week 3 trip to San Diego looms, but with a home game against Arizona awaiting them in Week 4, the Jets very possibly could hit their Week 5 bye at 3-1 with a head of steam.

That's getting ahead of ourselves, of course. But Favre brings an undeniable swagger to a Jets team hungry to build an identity for itself. This was only the first step in that process, but it was an important one, even if the host Dolphins were 1-15 last year. Now that we've seen Favre play a real game as a Jet, the whole nasty business of how he left Green Bay is a little further away in our memories.

The last time we saw Favre play a meaningful game before Sunday, he was throwing an game-turning overtime interception to doom the Packers' Super Bowl chances, against the storybook New York Giants. Not quite nine months later, Favre was helping New York win it this time too, but as a member of the Jets. Which is why he came back to the NFL in the first place, he said, to help a team win again.

"Tomorrow morning I'll probably be going that I don't want to play, but I know that I've said that this is what it's all about,'' Favre said. "I've said from day one that I know I've made the right decision. I enjoy these guys. There's no guarantee what's going to happen for the rest of the year. But I hope can bring something to this team that I've brought to every team that I've played with. Whatever that may be, as long as it helps us win.''

On Sunday in sunny South Florida, Favre helped the Jets win the first game of their new and hopeful Favre era. With the same play we've always seen from No. 4. Some good, some bad, and some things we've never seen before.
Posted by Robalini at Thursday, September 11, 2008