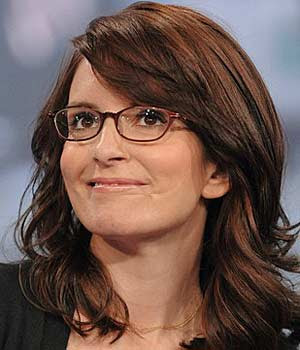 Tina Fey 'likely' to play Sarah Palin on 'SNL'
Speculation has been rampant about who would play Palin on the show.
From the Associated Press
9-14-8

Fey is "likely" to return to her former show Saturday to play the Alaskan governor and Sen. John McCain's running mate, a person close to the show told The Associated Press on Friday night. The person requested anonymity because the decision has not been announced officially. No further details were available.

Since Palin's entry onto the national political stage, speculation had been rampant over who might play Palin on the program. Many have commented that Fey resembles her.

In an interview earlier this week with The AP, "SNL" executive producer and creator Lorne Michaels said, "The whole world cast her in that role."

The final decision went down to the last minute, apparently. "SNL" premieres Saturday evening with Michael Phelps as host. An appearance had been planned by Sen. Barack Obama, but his campaign said early Saturday that the Democratic nominee for president was canceling.

Fey was a cast member and writer--including a stint as head writer--for "SNL" for nine years before leaving in 2006 to star in " 30 Rock," which is also produced by Michaels. On Tuesday, Michaels said that should Fey play Palin, she was unlikely to remain in the part in the long-term, which depending on the election results, could be for four years or longer.

Fey's publicist did not immediately return a call requesting comment.
Posted by Robalini at Monday, September 15, 2008