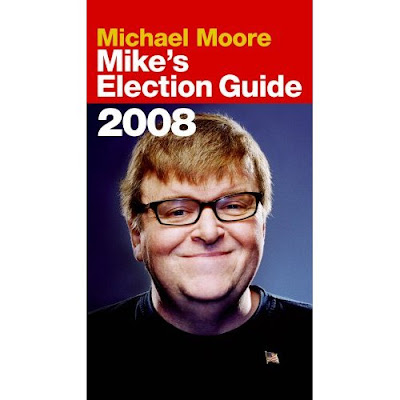 In his first book in five years, Michael Moore brings us the definitive guide to the 2008 election.

After a diastrous war, the failure to catch bin Laden, millions of families who have lost their homes, the Katrina debacle, soaring gas prices feeding record oil company profits, and the largest national debt caused by the biggest spending and borrowing administration in American history, the country has had it with conservatives, right-wingers and Republicans. A thrilling election season is now upon us. Obama vs. McCain. One candidate has promised a presidency different from any other, one that will take us forward to embrace the hope of the 21st century. The other candidate says he has no idea how to use a computer.

Welcome to MIKE'S ELECTION GUIDE -- Michael Moore's effort to make sense of the this fall's race for the White House and Congress. In it, Moore answers the nation's most pressing questions: "Why is John McCain so angry?,""Do the Democrats Still Drink from a Sippy Cup and Sleep with the Light On?," Can I get into the Electoral College with only a 2.0 gpa?" and "How many Democrats does it take to lose the most winnable election in American history?"

It's a great year to be an American and a voter. Don't miss out on all the fun! And don't miss out on MIKE'S ELECTION GUIDE -- it's the indispensable book that belongs in every American's back pocket this season.

In addition to his work as a mega-bestselling author, Michael Moore is an award-winning director. He lives in Michigan.
Posted by Robalini at Thursday, September 18, 2008