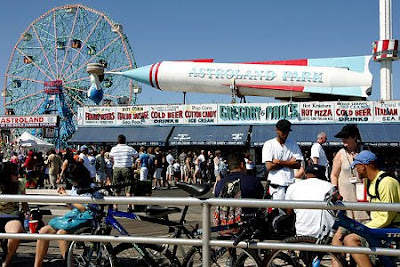 Astroland died Sunday - a casualty of Coney Island's changing future. She was 46.

The world-famous amusement park was locked its gates around midnight - a closing time that was pushed back twice because of the huge crowds that turned out for a final romp at the gritty landmark.

There were only-in-New York thrills - and a few tears.

"This place has a lot of memories for me," said a somber Josh Rayhan, 9, before a teary farewell spin on the Tilt-a-Whirl.

Hundreds of early birds made a mad dash for rides like the Pirate Ship, Water Flume and Breakdance - all slated to be sold - as the gates of the Surf Ave. landmark opened at noon.

Astroland owner Carol Hill Albert insisted yesterday she was pulling the plug for good despite hopes of a last-minute lease agreement with Thor Equities.

The park has teetered dangerously close to shutting down ever since Thor bought the land in 2006.

Last year, Thor gave Astroland a one-year reprieve from the wrecking ball - a deal reached a week before Halloween.

Another eleventh-hour lease deal is possible, but all signs suggest that's unlikely.

"I want to make it clear that despite rumors to the contrary, there are absolutely no negotiations going on," said Albert.

"Astroland Park, after 46 years in business, will have its final closing of the park. That is final."

Her 75 full-time employees will keep their jobs through January, she said.

Bensonhurst, Brooklyn, resident Alice Lombardo lined up early with her family, planning to hit "all the rides." The 3.1-acre park and the nearby beach have played a huge role in her life, and yesterday was no different, she said.

She and her son Peter, 11, intend to frame their ticket stubs.

"My dad's ashes are on the beach," said Lombardo. "This is my family's history."

Thor Equities spokesman Stefan Friedman said yesterday new rides would be ready for action by the start of next season in Coney Island - even if the city hasn't hashed out a final plan.

"With Astroland's closure a possibility for some time, Thor Equities has been in touch with numerous amusement operators who share our vision of beginning the revitalization of Coney Island even before a rezoning is passed that would allow for a permanent year-round redevelopment," Friedman said.

Coney Island resident Anthony Messiana took a seat at the back of the Pirate Ship ride and held on tight for one last time. But when the ship plummeted for the last time, Anthony couldn't resist. He paid $5 for another ride.

"Only when something really, really bad happens, do I cry," said Anthony, 9. "When they start to tear down Astroland I'm gonna cry like crazy."