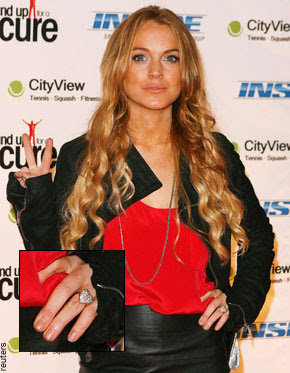 First there were the matching tattoos, then the public declarations of love and now it seems Lindsay Lohan will marry her lesbian lover.

Just days after DJ Samantha Ronson announced at a gig that Lindsay would be her wife by the end of year, the Mean Girls star is sporting this sparkler on her wedding finger.

And while dad Michael thinks the pair are just seeking fame and attention – which getting married after dating for only a few months obviously proves wrong – mum Dina approves.

She was by Lindsay's side as the actress showed off the heart-shaped jewel at a Marie Claire party.
Posted by Robalini at Monday, September 15, 2008