Ode to the Brown Derby Restaurants

It's hard to believe that no Brown Derby has been open for over 20 years in Los Angeles, even though it is still more closely tied to Hollywood than any other restaurant. It was a landmark restaurant in Los Angeles frequented by celebrities during the Golden Age of Hollywood. It was an example of novelty architecture, known for being physically shaped like a brown derby hat.

The first Brown Derby Restaurant (the only one resembling a hat - generally referred to as the "Wilshire Brown Derby") was first located at 3427 Wilshire Blvd. It opened in February 1926 across the street from the Ambassador Hotel. It was inspired by the shape of the hat worn by visiting New York governor and presidential candidate Al Smith, and it was the only Derby that was actually built in the shape of a hat. The Derby was often the site of afterparties following bashes at the Ambassador Hotel's Cocoanut Grove nightclub. In 1937, it moved one block up the street to 3347 Wilshire, next to the Gaylord Apartments. (Note: the Gaylord Apartments was the final L.A. headquarters for The Konformist.)

A second Brown Derby opened at 1628 Vine Street, near Hollywood and Vine on Valentine's Day, 1929. Other Derbies were later built in Beverly Hills (at 9537 Wilshire, across from the Beverly-Wilshire Hotel on Wilshire and Rodeo) and in Los Feliz at 4500 Los Feliz Boulevard. The Los Feliz Derby had a "car café" which emulated the then-new "drive-in" trend. 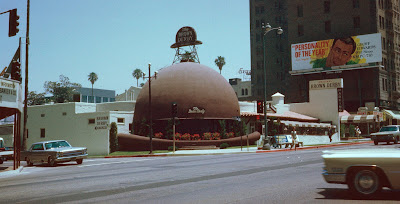 (Note the building to its right is the Gaylord.) 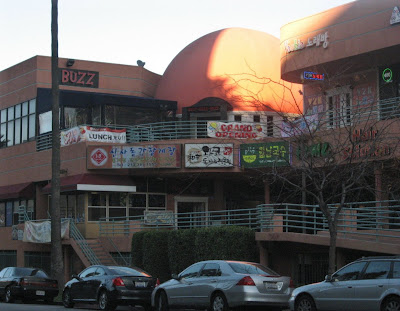 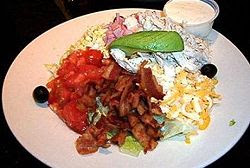 The most famous recipe of the Brown Derby is the Cobb Salad. In 1937, Brown Derby owner Robert H. Cobb went into the restaurant's kitchen to fix a late-night snack for Sid Grauman, operator of Grauman's Chinese Theater. He browsed the refrigerator for ingredients, and chopped them up. From then on, Grauman often requested that a Cobb salad be prepared for him, word spread about this creation throughout Hollywood, and it was eventually added to the menu. Here's the original recipe: 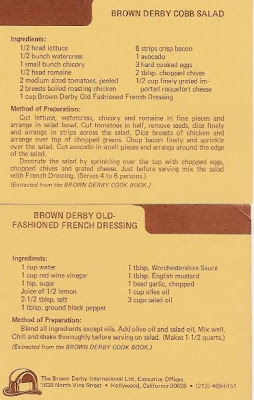 Besides the minimall, the only remnant of the Derbys still remaining is The Derby, a nightclub with swing dance (featured in the movie Swingers.) It opened in 1992 and is located at the Los Feliz site that closed in 1960. Aside from special theme restaurant at Orlando's Disney World, though, no Derby's currently exist. Though there are good eatings at the HMS Bounty bar & grill in the Gaylord: 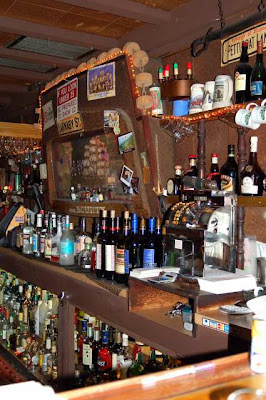 Which is a shame, for as LATimeMachines.com put it:

"Isn't it crazy the Hollywood doesn't have a Brown Derby recreation? And I'm not talking about the half-way recreations that have been attempted (including in Florida of all places.) How hard would it be to recreate the Wilshire Brown Derby Hat with its very austere interior? Please, if there is an insane Billionaire out there, let's make a new one and hire me to make sure it's done right! We need a Brown Derby Restaurant in Los Angeles!"