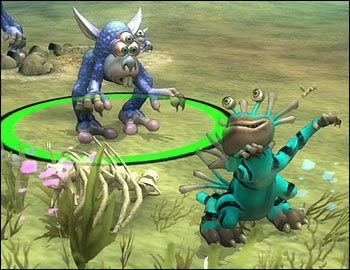 The Turtok species is trying to kill me. The Katmondo are my allies. I'm trying to befriend the Wurbles, but it might not work out, due to some other interplanetary commitments I'm hoping to maintain. Probably none of these alien species would want anything to do with mine, if they knew we used nuclear weapons as a shortcut to world domination a while back on our home planet of Fiumincino.

The latest computer game from the creator of the Sims lets players design and manage a virtual species from its earliest moments as a cell, all the way up to the era when it builds rockets and begins to venture into space and encounter other virtual lifeforms. It's an ambitious adventure filled with humor and eye candy, but at the end of its first week of release, Spore has already been the subject of much grumbling among game fans.

What has mainly caused a stir -- and some cancelled game purchases, from the looks of it -- is the title's anti-piracy scheme, which publisher Electronic Arts says is designed to keep people from sharing the $50 game disc with all of their friends.

Spore is set up so that owners have to activate the software online to enjoy all of its features, such as access to the online content users can download to fill out the game's virtual universe. Under the terms of the game's built-in "digital rights management" software, one copy of the game can be installed on three computers.

But those who have had a bad experience with this sort of software say the system counts computer upgrades as separate installations. In essence, they argue, EA is making people rent rather than buy the game. Some of the title's potential customers are actively discouraging their friends and anyone who will listen not to buy the game or any game from EA until the company changes its policies.

At Amazon.com, some 2,000 or so people have logged on and given Spore the site's worst possible rating; nearly all cite the DRM software as the reason for their contempt. The game's average review at the site is now a lowly one, out of a possible five, stars.

"I have no interest in paying full price for a game that I will be severely restricted from being able to play at a later point," one commenter wrote. "Imagine applying this to other products. What if you could only watch purchased DVDs on one specific DVD player and once you've played it on that system, you could never play them on another one?"

EA, for its part, says that 90 percent of its customers install PC games on only one machine, and that people with special circumstances requiring additional installations can call the company's customer-support number to plead their case. The publisher defends its antipiracy scheme as "just like online music services that limit the number of machines you can play a song on."

It's too early to tell if this week's flap will have an impact on the game's long-term success. Spore started the week as the top-selling item in Amazon.com's video game store when it went on sale, but by the end of the week it had slipped a couple of notches. A bite-sized version of Spore released for the iPhone for $9.99 was the No. 1 selling application at iTunes last week.

Aside from the DRM complaints, the game's reviews have been generally positive, if not wildly enthusiastic. Many of Spore's early players have complained that the ambitious game that was pitched as "your universe in a box" isn't entirely satisfying.

I nudged three friends into playing it last week, and none of them fell entirely in love with the game. One found Spore's many parts to be all derivative of other games, one had complaints with the game's interface, and one said she simply found the Sims more addictive than the new title.

I've been managing the evolution of my species, a meat-eating-type creature I dubbed Humberticus, for about 9 billion years, according to the game's clock. In real-world time, that's somewhere north of a dozen hours, and I could probably pour another dozen hours traveling through virtual space in order to encounter more of the oddball creations people have designed with the game's nifty tools.

The game's chief designer, Will Wright, told me a couple of weeks ago that he always figured this would be a half-finished game at its launch. That's because the idea was to get users to create the content; the aim was to make the game "like browsing an endless art gallery," he said.

As I peruse the Sporepedia, an online roster that keeps track of what players have designed, I find a series of creatures that users have evolved to look like hamburgers. Another player has spent serious time building a collection of famous fictional spaceships from Star Wars and Star Trek. One of the most popular creatures right now is the Charles Darwin species, a pudgy, bearded bald guy dressed in caveman gear. Already, sort of like on Facebook, I've got my real-world friends and Spore-friends mixed together as I subscribe to content made by the game's early wave of players.

If Spore becomes wildly popular, like Wright's last game, I can only imagine that the game will follow the rest of the Web's development and we'll soon see a new equivalent of spam species, with creatures trying to sell Viagra or promote online dating sites.

Already, I'm a little tickled to see that people are using the game to poke fun at itself. Some joker, for example, has created a species named EA's DRM Policy. While I can't tell for sure what it's supposed to be, it looks kind of like a creature with its head parked up in its hindparts.
Posted by Robalini at Thursday, September 18, 2008

Email ThisBlogThis!Share to TwitterShare to FacebookShare to Pinterest
Labels: Charles Darwin, Spore, The Sims, Will Wright