Steal Back Your Vote

Get informed. Kennedy and I are about to publish our report and put it on the airwaves. Sign up and get the notice- via RSS, MySpace, facebook or e-mail and you’ll be the first to know when the news breaks.

BROADCASTERS: Pull down our Steal Back Your Vote! video and audio PSAs from the likes of Jim Hightower, Robert F. Kennedy Jr., Willie Nelson and Mimi Kennedy and add it to your podcast or radio program.

Reverend Jackson has asked me to pass on these words: "We've marched too long, worked too hard, and died too young to let them steal our vote. For Dr. King, for Mandela, for Medgar Evers, for Goodman, Chaney and Schwerner - download it and fight back!" 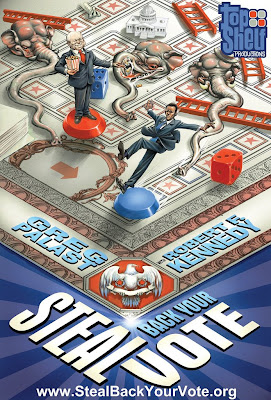 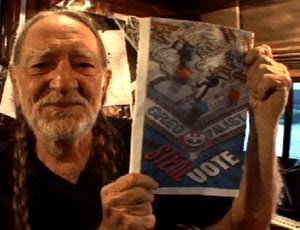 “THEY’RE STEALING YOUR VOTE… WELL, STEAL IT BACK!”
- Willie Nelson

Willie Nelson has his copy. In just days, you’ll be able to get yours, too. Sign up for updates, and we’ll let you know the moment it’s ready!

Robert F. Kennedy Jr. blew the lid off the Theft of 2004 in his masterful Rolling Stone article.

Now Kennedy and Palast have teamed up to investigate THE THEFT OF 2008. They’ve uncovered the scheme to swipe votes by the millions. 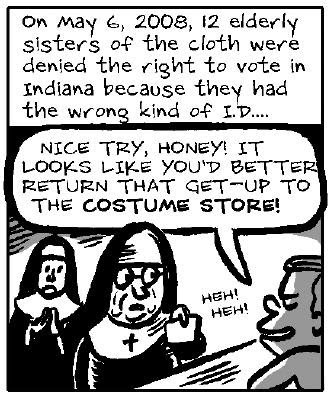 So,what are you going to do about it?

That’s easy: STEAL BACK YOUR VOTE!

#1. Sign up to get updates on the Steal Back Your Vote! investigation. And be the first to find out about the release of the voter Guide by Palast and Kennedy. Illustrated by graphic gonzos Ted Rall, Lukas Ketner and Troubletown’s Lloyd Dangle.

#2. Get your organization to sponsor the Steal Back Your Vote! Campaign. There’s no charge for your group to join The Progressive Magazine, Guerrilla News Network, VoterRescue, Action Point with Cynthia Black, Air America Radio’s Clout!, Progressive Democrats of America, and the Nation Institute/Puffin Foundation.

#3. Get informed - sign up to get the full story on how they’re shoplifting the White House at www.StealBackYourVote.org - via RSS, myspace, facebook or e-mail.

Watch out! Coming soon - Greg Palast and Bobby Kennedy in Steal Back Your Vote! - the Film - from the pueblos of New Mexico to Karl Rove’s emails (really!), the real scoop. 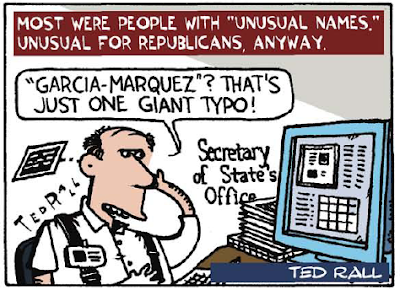 www.StealBackYourVote.org is a project of the non-partisan, non-profit Palast Investigative Fund.

Palast: One out of five Colorado voters purged from voter registration
Outcome of 2008 election likely to be skewed by unethical tactics
RealVail.com
By David O. Williams
Friday, August 29th, 2008 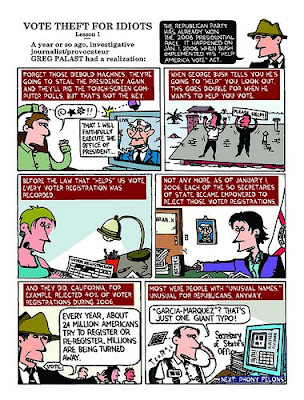 August 27, 2008 — Robert Kennedy Jr. had a pretty good excuse for skipping his scheduled appearance with investigative journalist Greg Palast to promote their latest project, “Steal Back Your Vote” — a report on voting irregularities and fraud in the 2008 election.

Palast, speaking at the Progressive Democrats of America gathering at a downtown Denver church during the DNC Tuesday, excused Kennedy’s absence to be with his uncle, Monday’s inspirational surprise speaker Sen. Ted Kennedy, and introduced a surprise replacement of his own, Amy Goodman of Democracy Now.

Progressive investigative journalist Goodman asked a delegate to hold up a goody bag with sponsor logo from AT&T on one side and decried the influence of big corporate money on the modern American political process.

She talked about trying to get into a delegate gathering at Mile High Stadium Monday and being denied access by towering security guards. Goodman said delegates at a corporate party are in training for just how skewed by campaign contributions politics in America have become, and added that there can be no good reasons to keep the press out, only bad ones.

“When you’ve got money saturating politics, and even if you care deeply about the public good, you’ve got to see where the money is and that’s what this is about every four years,” Goodman said. “It’s about teaching (budding politicians) big-money politics.” 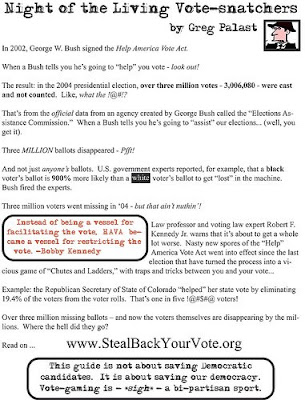 Goodman said AT&T’s sponsorship of the DNC is the Democrats’ reward for refusing to block a bill several weeks ago giving telecom companies retroactive immunity for facilitating domestic spying by the feds. She also urged support of independent media during both parties’ political conventions in order to limit and expose excesses by police against protesters in Denver and Minnesota.

Palast took back the microphone to talk up his project with Kennedy, which will be the subject of a feature in a major national magazine next month and which also will be released as a 24-page comic-book-style PDF illustrated by three top political cartoonists. The report will be available on the Web site www.stealbackyourvote.org.

Palast said former Colorado Secretary of State Donetta Davidson has made the state the epicenter of the rampant practice of purging voter registration lists for alleged irregularities — a tactic now even more en vogue in the wake of new legislation backed by the Bush administration.

“Now under the Help America Vote Act the entire nation is Floridated, but the champ, [former Florida Secretary of State] Katherine Harris, ain’t got nothing on Colorado,” Palast said. “We’re sitting at purge ground zero. The reason that there’s a convention here is this is a swing state where Democrats are piling in, tens of thousands of new voters in Colorado at the top of the bucket, but at the bottom of the bucket the spread sheets are going (poof).

“What’s happening? Donetta Davidson, who had been secretary of state in the state of Colorado, removed 19.4 percent — one out of five voters in the state of Colorado, she removed their names. And what happens to Davidson as a result of this? The answer is George Bush made her head of the brand new Election Assistance Commission, where she can train all 50 secretaries of state in her purging ways. In fact, President Bush, instead of calling her chairwoman of the EAC, was going to call her the Purging General.” 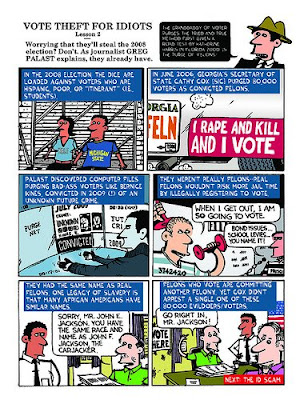 Night of the Living Vote-snatchers -
from Steal Back Your Vote!
by Greg Palast 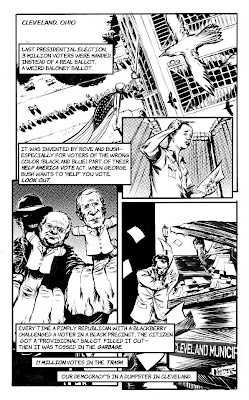 When a Bush tells you he’s going to “help” you vote - look out!

That’s from the official data from an agency created by George Bush called the “Elections Assistance Commission.” When a Bush tells you he’s going to “assist” our elections... (well, you get it).
Three MILLION ballots disappeared - Pfft!

And not just anyone’s ballots. U.S. government experts reported, for example, that a black voter’s ballot is 900% more likely than a white voter’s ballot to get “lost” in the machine. Bush fired the experts.

Three million voters went missing in ‘04 - but that ain’t nuthin’!

Law professor and voting law expert Robert F. Kennedy Jr. warns that it’s about to get a whole lot worse. Nasty new spores of the “Help” America Vote Act went into effect since the last election that have turned the process into a vicious game of “Chutes and Ladders,” with traps and tricks between you and your vote...

Example: the Republican Secretary of State of Colorado “helped” her state vote by eliminating 19.4% of the voters from the voter rolls. That’s one in five !@#$#@ voters!

Over three million missing ballots – and now the voters themselves are disappearing by the millions. Where the hell did they go?

Posted by Robalini at Thursday, September 25, 2008