Anne Hathaway could contend at Oscars 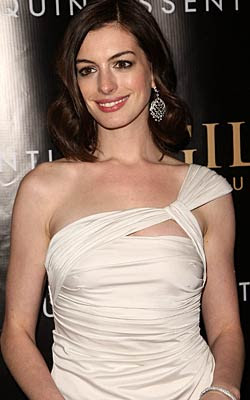 If you thought Anne Hathaway was brave for singing and dancing with Hugh Jackman on the recent Oscarcast, that was a walk in the park compared with her next performance — playing Judy Garland on both stage and screen. The Oscar-nominated actress ("Rachel Getting Married") is to star in upcoming film and legit adaptations of Gerald Clarke's 2000 biography "Get Happy: The Life of Judy Garland."

With the Weinstein Co. producing both these properties, Anne Hathaway is in good hands. While there is no word as to any of the other creatives involved in these projects, the source material is rich with possibilities, including as it does material in Judy Garland's own words. Gerald Clarke's biography of the late, great writer Truman Capote was the basis for "Capote," which was nominated for five awards at the 2005 Oscars including best picture and won lead actor for Philip Seymour Hoffman.

If Hathaway can pull this part off, she would be a leading contender at both the Oscars and the Tonys. Seven of the last 10 women to win lead actress at the Academy Awards did so by playing real-life roles. The irony of course is that Judy Garland never won a competitive Oscar. In 1939, she was awarded an honorary one for her timeless performance in "The Wizard of Oz."

However, she lost both of her Oscar races. In 1954, Judy Garland made one of the all-time great screen comebacks, proving herself a triple threat with her acting, singing and dancing in the musical remake of "A Star Is Born." So sure was the academy that she would win the lead actress Oscar that they set up a television camera in Judy's hospital room where she was resting after having given birth to son Joey just days before. However, it was Grace Kelly's name that was announced, for her role as the dutiful wife to an alcoholic actor (Bing Crosby) in "The Country Girl." And while Judy Garland was nominated for her 1961 supporting performance as a witness in "Judgment at Nuremberg," she lost to Rita Moreno for "West Side Story."

Judy Garland never appeared in a Broadway musical in her all-too-short life. In 1967, she was so eager to take over from Tony winner Angela Lansbury in "Mame" that she watched the show from the wings for nights on end. However, the producers could not get the insurance to cover the costs should Garland not appear. She did win an honorary Tony Award in 1952 for "for an important contribution to the revival of vaudeville through her recent stint at the Palace Theatre."

Broadway usually favors the fanciful over the fact-driven, though the last two Tonys for lead actress in a musical went to hopefully heightened portrayals of real-life women — Christine Ebersole ("Grey Gardens") and Patti Lupone ("Gypsy"). While Hathaway has never appeared on Broadway, in 2002 she tackled a Tony-winning role for five performances of a concert version of the 1961 musical "Carnival." As the orphaned Lili (a part that earned Anna Maria Alberghetti the lead actress award), Hathaway shone opposite Tony winner Brian Stokes Mitchell ("Kiss Me Kate"). This summer, Hathway is to star in a production of "Twelfth Night" as part of the Public Theatre's celebrated Shakespeare in the Park series in New York's Central Park.

The big question is whether Anne Hathaway will sing the songs so associated with Judy Garland or mime along to recordings. In 2001, both Tammy Blanchard and Judy Davis won Emmy Awards for playing Judy Garland in the mini-series "Me and My Shadows." They both lip synced to Judy's unique song stylings. In 2004 Isabel Keating earned a Tony nomination as featured actress in a musical for her portrayal of Garland in "The Boy From Oz." She lost to Anika Noni Rose for "Caroline or Change."

While Isabel Keating performed musical numbers as Judy, she was not singing Garland songs. Rather, as the musical told the story of one-time Garland son-in-law Peter Allen, she sang some of his tunes. And bringing this item full circle, Hugh Jackman won the lead actor in a musical Tony Award for playing the singer-songwriter once married to Liza Minnelli.