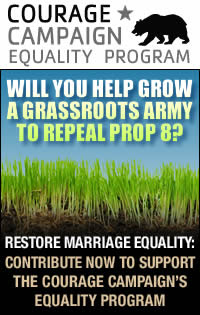 Today is a turning point. And, as Harvey Milk used to say so often, we're "here to recruit you."

A few minutes ago, the California Supreme Court heard the final oral arguments in the case to overturn Proposition 8. Within 90 days, we will know whether the court will restore equal rights or uphold injustice.

No matter what the state Supreme Court decides, the fight for equality will continue in California and across the country.

If we win, the same people who backed Prop 8 will find another way to undermine equal rights. If we lose, we will need to take our case to the people of California again. No matter what, we'll eventually need to win full equality under federal law.

At nearly 700,000 members and growing, the Courage Campaign is building an army to prepare for this fight -- the kind of people-powered movement that Harvey Milk would lead. A movement that proudly portrays -- and tells the stories of -- the people victimized by the discrimination of Prop 8, "Don't Ask, Don't Tell" and the Defense of Marriage Act.

We're here to recruit you. Will you help the Courage Campaign build this movement? Please contribute what you can today to restore marriage equality to California and bring equal rights to America:

Harvey Milk understood the need to organize communities from the bottom-up, the need for gay, lesbian, bi-sexual and transgender people to be out and proud as leaders in this movement, and the need for straight allies to join them in solidarity.

That's why we worked so hard to get the film "Milk" to movie screens across America. We wanted to show a new generation of Americans how Harvey organized to win landmark victories in the fight for equal rights.

Just like Harvey did in 1978 when he led the movement to defeat the "Briggs Initiative," the Courage Campaign is organizing across California to repeal Prop 8 -- training marriage equality activists at "Camp Courage" events, launching Equality Teams county-by-county, and producing online videos like the heartbreaking "Fidelity," viewed by more than 1 million people.

The only way we will win true equality in California and across the country is by giving people the power to do it themselves. And that's what the Courage Campaign is doing. Please contribute what you can afford today to help the Courage Campaign build this people-powered army from the ground up:

Thank you for joining us in supporting the Courage Campaign.