THE MINDSCAPE OF ALAN MOORE 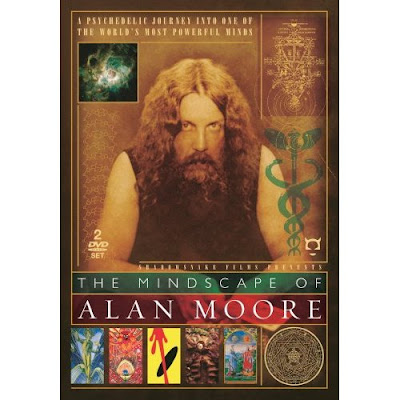 THE MINDSCAPE OF ALAN MOORE: A disinformation® DVD Exclusive

"Alan Moore is universally acknowledged as the most important mainstream comics writer of the last three decades." —Slate.com

ALAN MOORE is likely best known among the uninitiated for Hollywood adaptations of his beloved works, which include From Hell, The League of Extraordinary Gentlemen, Constantine, V for Vendetta, and the now ubiquitous Watchmen. The Disinformation Company now offers a chance to enter Alan Moore's innovative world through this special 2-disc collector's set featuring the riveting documentary THE MINDSCAPE OF ALAN MOORE and over three hours of bonus footage.

THE MINDSCAPE OF ALAN MOORE will answer those questions you'll have in mind after seeing the most anticipated film of the year. For a sneak preview, Disinformation proudly presents a rare, extended interview with this grand author of our modern mythology — ALAN MOORE — freely available on:

Disinformation: The Podcast hosts Raymond Wiley and Joe McFall spend an hour talking to Alan about his background, the upcoming League of Extraordinary Gentlemen comic release, and the acclaimed disinformation® documentary THE MINDSCAPE OF ALAN MOORE: the only feature film production in which Alan Moore collaborated on, and personally granted permission to use his work. Raymond and Joe also interview a true visionary — DEZ VYLENZ — producer and director of THE MINDSCAPE OF ALAN MOORE.

NEW YORK, NY — As recent Comic-Cons have set records for attendance, much of the "buzz" centers on Zack Snyder's eagerly anticipated, big screen adaptation of the Hugo Award-winning cult classic graphic novel Watchmen, authored by legendary comic book writer Alan Moore. Now, in the first and only documentary in which the reclusive, visionary and innovative Moore participates, his hugely-devoted fan base and the soon-to-be-indoctrinated can enter the mind of this modern-day philosopher, artist and magician.

This exclusive 2-disc collector's set, features over three hours of extras that further illuminate the masterful mind of Moore, including:

The award-winning film, from director DeZ Vylenz, leads the audience through Alan Moore's world with the writer himself as guide, beginning with his childhood background, following the evolution of his career as he transformed the comics medium, through to his immersion in a magical worldview where science, spirituality and society are part of the same universe.

As excitement builds for Watchmen, get an inside glimpse inside the psychedelic worldview of one of the world's most visionary and creative minds with THE MINDSCAPE OF ALAN MOORE.

About disinformation®: The Disinformation Company Ltd. is active in TV production, book publishing and home entertainment. It is most widely recognized for its distribution of products on subjects not usually covered by the traditional media. Recent DVD exclusives from The Disinformation Company include Michael Moore's Slacker Uprising, the Sean Penn-narrated War Made Easy, Robert Greenwald's documentaries Wal-Mart: The High Cost of Low Price, Outfoxed: Rupert Murdoch's War on Journalism, and Iraq For Sale: The War Profiteers, and Robert Baer's The Cult of the Suicide Bomber. For more (dis)info please visit www.disinfo.com.
Posted by Robalini at Saturday, March 07, 2009