Thousands march against Arpaio in Phoenix

Thousands march against Arpaio in Phoenix
Feb. 28, 2009
The Arizona Republic 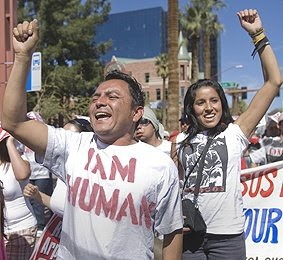 Omar Leon, 33, of Los Angeles and Cristina Medina, 22, of Tempe, march south on Central Avenue during a demonstration against Sheriff Joe Arpaio.

Thousands of opponents of Sheriff Joe Arpaio's illegal-immigration policies held their "March to Stop the Hate" in downtown Phoenix on Saturday..

As of 1:30 p.m., the speeches were still being made at the march's destination, the federal building. According to initial reports, the march was peaceful, with no major incidents as of early Saturday afternoon.

Crowd estimates from organizers and law enforcement were not immediately available, but at least one estimate put it at about 3,000.

Along the march route, between 100 and 200 Arpaio supporters gathered at the Wells Fargo Tower. Many carried "We Support Sheriff Joe" signs, among others.

The event was being led by the National Day Laborers Organizing Network and El Puente Arizona, and feature Zach de la Rocha, former lead singer of Rage Against the Machine. De la Rocha arrived at about 10:30 a.m., just before the march began at Steele Indian School Park.

Organizers marched south on Central Avenue past the Immigration and Customs Enforcement building. The route also passed Wells Fargo Tower - where Arpaio has his headquarters - and ended at the federal building on Washington Street.

Astrid Galvan and Jeffrey Javier contributed to this report.