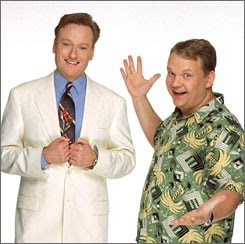 LOS ANGELES (AP) — NBC says Andy Richter and Conan O'Brien will be back together again on late-night TV.

Richter, who worked with O'Brien for seven years on NBC's Late Night, will become the Tonight show announcer when O'Brien takes over from Jay Leno as host in June. NBC said Richter also will take part in comedy bits.

O'Brien called Richter a friend and one of the funniest people he knows, but couldn't resist a joke: O'Brien said he's looking forward to their reunion because Richter owes him $300.

After leaving Late Night in 2000, Richter starred in the TV series Andy Richter Controls the Universe and Andy Barker, P.I., and appeared in Talladega Nights, Blades of Glory and other movies.
Posted by Robalini at Friday, March 06, 2009