The 'Holy Grail of comic books' goes on sale 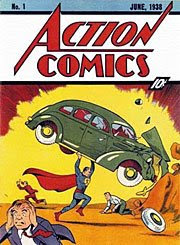 In April 1938, Jerry Siegel and Joe Shuster introduced Superman to the masses. From that moment forward, pop culture would never be the same.

Superman first appeared in Action Comics #1, and today it's almost impossible to find a copy of the book. However, miracles do happen, and the valuable issue -- in good condition, no less -- has come to light. (The owner purchased it in 1960 when he was 9 years old. It cost him 35 cents.)

The book goes up for auction Feb. 27 on ComicConnect.com. Bidding starts at $1, and there's no telling how high it will go. Action Comics #1 is estimated to be worth $126,000 in "fine condition," but experts expect it to sell for more.

Aside from the price, several questions surround this big sale. For one thing, will any celebrities get in on the bidding? Could this be Jerry Seinfeld's dream come true?

We'll find out March 13, when the auction closes. If, like me, you can't afford such a precious artifact, read the comic online:

Email ThisBlogThis!Share to TwitterShare to FacebookShare to Pinterest
Labels: Superman