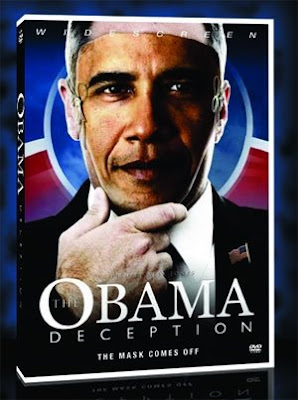 Alex Jones’ latest edifying documentary, The Obama Deception, is without doubt his most timely work to date.

As we teeter on the brink of a full blown economic depression fueled by the excessive inflationary monetary policies of governments and the international banking cartels they operate under, the American people have turned to a man who has been masterfully presented to them as their last HOPE.

As we stare over the precipice into a cultural, moral and spiritual abyss that has been shifted ever closer by decades of interventionist foreign policy and the growth of a political agenda dominated by an unfettered military industrial complex, the masses have identified with a carefully staged call for CHANGE.

As we peer across the ever receding divide between unconstrained freedom and a system of authoritative control empowered by the continual subversion of basic liberties, the public has chosen to invest their fragile confidence in a figure they have been astuciously persuaded to associate with PROGRESS.

This is THE OBAMA DECPTION.

The Obama Deception lays bare the cynical fraud behind the spell binding image of the new president, a slick front man for the corporate oligarchs who have seized control of the country from the shadows.

The film is not about left or right politics, but instead seeks to shine a light on a deep-rooted agenda to use America and its largely unwitting population as the engine for global dominance, while feigning to represent the best interests of the nation.

The documentary, perhaps most importantly, outlines the fact that even if Barack Obama had the best intentions in the world, they would not come to pass because he is firmly rooted within a perennial and clandestine power structure that spans beyond presidents, borders and economies.

The Obama Deception emphasizes that only by facing up to and challenging this overriding architecture, the modus operandi that has come to shape our way of life and the world around us, can we actually achieve any palpable and effective change.

Those who supported Obama’s election will undoubtedly reassess their reasoning when they see how he continues to expand the machinery of warfare, how he has purposefully and meticulously left in place the framework of torture & renditions, how he has personally pushed through banker-bailouts, advanced the elitist North American Union agenda and much more.

Featuring interviews with leading economic analysts, politicians, business professionals, journalists, authors, social commentators and entertainers, in addition to empirical research and analysis by Alex Jones and the Infowars team, The Obama Deception is part political investigation, part cultural exploration of the pivotal and decisive times we live in.

Stock your arsenal of truth with this DVD. Simply purchase a copy at the Infowars store on the web or call 1-888-253-3139 toll free.

Alternatively, a subscription to Prisonplanet.tv, for just $5.95 per month will enable you to watch the film immediately in super hi-res quality. You may also download the film, burn copies and get the word out. In addition you will receive access to ALL previous Alex Jones films, countless other documentaries and video reports, as well as 4+ hours of streaming video added every day.

What people are saying about The Obama Deception:

Excellent movie. I can’t see how any Obama supporter can honestly look at this movie and the facts it presents and not conclude that Obama’s administration is a giant bait-and-switch fraud.

I love this movie, I feel so much more awake. This is an excellent first movie to show a family member of mine who is finally ready to listen.

This really was the first time I am viewing an AJ documentary and seeing the events occurring in real time all around. The footage is completely on time, ahead of time. I mean these things are happening right now. The whole thing could be titled: BREAKING NEWS: EMERGENCY BROADCAST

This seems to be Alex’s most refined, effective, and well put together film yet.. great balance and use of credible voices like Gerald Celente and Webster Tarpley, and “people’s people” like Willie Nelson, KRS-One, and Ventura.. I was a bit fearful that Alex might use somewhat divisive tactics in the film like referring to Obama as ‘Barack Hussein Obama’ or going after his citizenship etc.. but this is really looking like a very powerful, well balanced, explosive indictment against the left/ right paradigm.

Just finished watching, and I gotta say there was a lot of eye-opening information within that documentary. I initially voted for the guy, but after all of the reversed decisions and shady legislation being passed, I’ll probably be voting for someone of Ron Paul’s stature in 2012.
Posted by Robalini at Sunday, March 22, 2009