Pepsi Products Get a Sweet Makeover 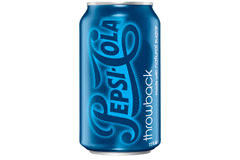 Members of the original Pepsi Generation are about to get a sweet trip down memory lane. The company announced on Thursday that three new "retro" sodas will be hitting beverage aisles beginning in March and April.

Frank Cooper, a VP for Pepsi-Cola North America Beverages announced via the company's website, "Pepsi Natural and the Throwback duo (Pepsi and Mountain Dew) give consumers the opportunity to refresh how they experience soft drinks."

Two more brand extensions, Pepsi Throwback and Mountain Dew Throwback, will be available for a limited time only. These soft drinks are also sugar-sweetened and packaged with an old school design, inspired by the '60s and '70s. Both will be nationally available beginning April 20th, for a limited run of eight weeks.

High fructose corn syrup has come under fire from opponents who claim that the substance -- chemically identical to sugar -- promotes obesity, though no scientific causality has been found. HFCS became popular with manufacturers in the 1980s as an alternative to cane sugar, which generally costs twice as much. Sugar sweetened Pepsi products, indicated by a white cap, are available in the United States during Passover, as the consumption of corn is forbidden under Kosher law during that time period.
Posted by Robalini at Thursday, March 19, 2009