Phish dusts off deep cuts in return to stage 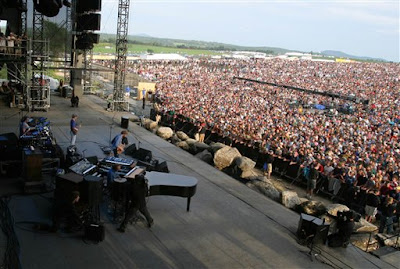 Phish dusts off deep cuts in return to stage
By JOSH L. DICKEY
3-7-9

The Vermont jamband ignited the second stage of its career as a touring juggernaut Friday night at the Hampton Coliseum, rocketing deep into their past to sate fans who've been waiting years to see them play live again.

With deep cuts like "Fluffhead," "Divided Sky" and "Chalkdust Torture," the foursome built the backbone of its first set on old-school material, expertly navigating hairpin changes and showing as much spunk as they ever have in this millenium.

Fans began to materialize around the spacecraft-styled hockey arena in Virginia by early afternoon, then swelled to a hollering mob by nightfall -- a scene the band's fiercely devoted following has longed to see since Phish called it quits in 2004.

Guitarist Trey Anastasio, brisk and energetic, snapped into the crisp form he was feeling around the time of their New Years Eve show in 1999, a widely accepted zenith for the band (except the moment ABC's coverage of Y2K cut to Peter Jennings introducing them to their largest TV audience ever as "The Phish").

While the band's detail-oriented crowd has never let Jennings live that one down, they were forgiving of Phish's five-year absence, crowding the Hampton area with rental cars, "no vacancy" signs and ticket-seekers, who patrolled highway exit ramps Friday evening, offering to trade cash or tickets for stops along the band's sold-out summer tour.

Anastasio, bassist Mike Gordon, keyboardist Page McConnell and drummer Jon Fishman are playing three shows in Hampton, their first since an amicable split that turned out to be more burnout therapy than the end to their 20-year run on the road.

Fans responded. When the reunion concerts were announced last fall, seats for the opening show were being resold for as high as $1,000 — and even more nefarious tactics than scalping were at play: Inside the venue on Friday, 29-year-old Rod Stewart said he bought a fake with a happy ending.

"We bought three tickets in the parking lot for $100 each, and when the lady scanned them, they came up 'counterfeit,'" said Stewart, of Chesapeake, Va., "but she let us in anyway."

Ryan Lafata, a spokesman with the Hampton Convention and Visitors Bureau, said it's possible to have upwards of 75,000 people come to the area for the three shows at the Coliseum, which holds about 13,000 for general-admission events.

Many of those fans included those who didn't have concert tickets, but traveled to congregate outside the coliseum to take in the scene and reunite with old friends.

Brett Hinckley of Greenville, S.C., said the coliseum is a favorite venue for Phish and its fans, who call the building "the mother ship" because of its resemblance to a giant UFO.

"The energy in the building is second to none," Hinckley said before the show. "Once you experience it, you just kind of need to be back."

Phish, which formed at the University of Vermont in 1983, is known for its amorphous blend of rock, jazz, bluegrass and other styles, which often launch into intense improvisations. Often likened to the Grateful Dead, they are a moderate commercial success in terms of sales, but remain a lucrative touring act.