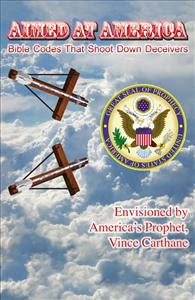 When you see all these parallel patterns, you will discover how the scriptures have been foreseeing the future (Galatians 3:8). There's no other Bible code book like this!

After comparing hundreds of notes, I discovered that the King James Bible contains a "pattern" (Titus 2:7) to reveal forms of "hidden wisdom" (2nd Corithians 2:7).

However, this “pattern” (Numbers 8:4) can only be lined up “where the word of a king is” (Ecclesiastes 8:4). This is also why you’ll be repeatedly shown that the name of King James is secretly a sign to confirm which version of the Bible is the only authorized word of God for “the vision” (Ezekiel 8:4) to be revealed in the last days.

This critical review will challenge the way Christians look at the King James Bible and the nation that began at Jamestown, Virginia.

January 2010 A.D. signifies a New Year and a new decade. But what else does it signify?

Since "A.D." (Anno Domini) means "In The Year Of Our Lord" and "B.C." has meant "Before Christ", why does this wicked world continue to measure time based on Jesus Christ?

Well, if you'll consider this book as being for entertainment purposes only, please allow me to make a fool out of myself by proclaiming that those who rule this world know when Jesus is coming back.

Remember, Jesus taught in parables, which are parallels. So let's see what happens when we actually line up the scriptures through parallel numbers.

Recognize that Mark 16:20 tells us to confirm the Word with signs. Therefore, considering 1st Chronicles 16:20 speaks of a people going from one nation to another nation, why does that parallel with the people of King James getting on the Mayflower to go solidify the newly colonized land at Jamestown, Virginia in 1620?

The Bible mentions a 400 year end-time prophecy twice (Genesis 15:13 and Acts 7:6-10). I brought this up because on the front cover of the June 2004 Popular Science magazine, they indicated that the United States pentagon is preparing for a war against heavenly forces in the year 2020, which is exactly 400 years after the Mayflower solidified the American colony in 1620.

Again, please allow me to make a fool out of myself by pointing out that John 20:20 is a number that contains the words: "... Then were the disciples glad, when they saw the Lord."

Likewise, at Daniel 8:17, we're plainly told that the time of the end shall be the vision. This is why it's no coincidence that when your doctor says you have the right vision, you're seeing 20/20.

When will these parallels stop being coincidences and start being a conspiracy of secrets that common folk have been deceived not to perceive?

Notice, those like the Masons- who laid the foundation of America- are known for keeping secrets. They also display images of Solomon's Temple for signs.

While building Solomon's Temple at 1st Kings 6:20, Solomon told the Masons that the oracle shall be 20 cubits in length and 20 cubits in width. So recognize that one definition of an oracle is a place where prophecies are given in ambiguous terms.

Jesus was a carpenter/mason who was rejected by the builders and killed at the age of 33, which is reportedly the number of the highest degree of the Masons.

Jesus was betrayed, which means he was double-crossed. And that's another sign because the cross is also the letter "t"( the 20th letter of the alphabet). 20/20 dimensions.

There are many more end-time parallels and more specific messages about the United States. This book also contains specific Bible code messages about Martin Luther King, Islam, Television and many other newsworthy topics.

Your friends will be amazed by the insights you reveal from this book, especially since churches won't teach the hidden wisdom in the Bible.
Posted by Robalini at Wednesday, February 10, 2010

Who's the "Protector of the Principality of Pretribulatia"?
Edward Irving? John Darby? C. I. Scofield? Tim LaHaye? Someone else?
Media figure Joe Ortiz knows the answer. It's in his "End Times Passover" blog. The one dated Dec. 29, 2009.
If you're Calvinist, you're predestined to see his blog. If you're Arminian, you can choose to see it.
It will be too late to find out the answer to the above trivia question if the rapture happens!