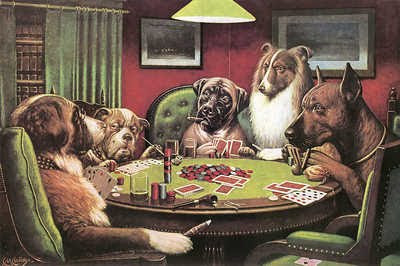 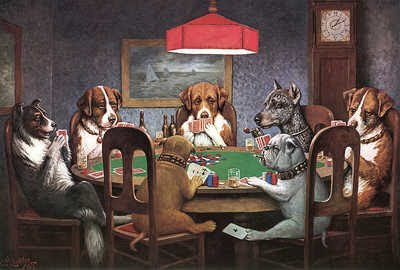 Cassius Marcellus Coolidge. Although many people may not know this name, almost everyone is familiar with this man's paintings. His works may not have the distinction of being displayed in the Louvre or on the ceiling of the Sistine Chapel, but they are just as invasive in contemporary society. His paintings instead thrive in basement billiard rooms and at flea markets. These famous works of art Cassius Coolidge produced depict "dogs playing poker." Although Coolidge's most famous contribution is the paintings of his poker dogs, he had a surprising number of other accomplishments and achievements throughout his life. 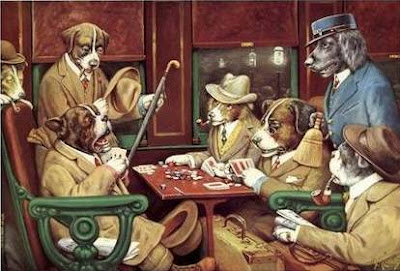 Cassius Coolidge, or "Cash" as many of his friends called him, was born on September 18, 1844 to Nathan and Martha Coolidge, successful farmers living in upstate New York. Their farm and home was located on Hoyt Street between the small towns of Antwerp and Philadelphia, New York. Cassius's parents were old time Quakers and, inasmuch, strong abolitionists. Cassius was named after Cassius Marcellus Clay, the brother of the famous statesmen Henry Clay. He had two brothers and two sisters: John, Clinton (August 24, 1834-February 3, 1856), Abi (born July 28, 1848) and another unknown sister. The birth and death records of some of Cassius's siblings are not known. A partial Coolidge family tree can be seen in Appendix II. 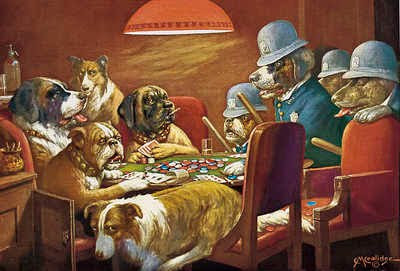 Information concerning Cash's childhood is scarce, but it is known he spent much of his time traveling between the nearby towns of Philadelphia and Antwerp. He would either travel by foot or use horse drawn sleighs during winter. From March of 1861 till August of 1863 he was listed as a student in the Catalog of the Officers and Students of the Antwerp Liberal Literary Institute. This institute was established to further education in this rural area outside the town of Watertown. It is not know what Cassius studied there. In March of 1864 though, he "received certificates" from the State and National Business College. 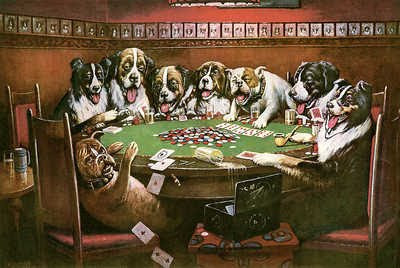 In 1871 or 1872, Cassius founded the first bank in Antwerp. He gained the experience necessary to run the bank through courses taken at Eastmans College, located in Poughkeepsie, a town north of New York City. While studying there he learned bookkeeping, math, and commercial law. During this time he also worked as a bookkeeper at Eastmans College Bank. He performed this job well because he was eventually promoted to assistant cashier. The rest of his knowledge concerning banking resulted from reading books about the business. In 1889 Cassius's bank was sold to John D. Ellis. It still survives as the Jefferson Bank. Interestingly, he was commissioned by Jefferson Bank to do a self portrait. That portrait is currently located at Antwerp's library.

Cash had many other accomplishments in and around the small town of Antwerp. In 1865 or 1866 he worked at a drug store that he eventually bought with a friend. He quickly lost interest though, and sold his share. Despite the fact he had already owned and sold one drug store, with an initial investment of $250 Cassius and his brother John founded another drug store in Rochester, New York in 1872. The store was sold within a couple of years for an unknown amount. Cassius also founded his hometown's first newspaper in 1871, aptly named the Antwerp News. Unfortunately, this newspaper later went out of business. Some of the many handyman jobs that Cassius also did included painting numbers on houses; painting street signs; superintendent for a school district; working for Frank Leslie's Weekly "directing wrappers;" working at the Fanuel Hall Market House; helping on his family farm by plowing, cultivating, and collecting sap from maple trees; the Antwerp Town Clerk; involved with the Masonic Temple; and received a patent for a device to collect fares from street cars. Quite a long and impressive list, especially since creating paintings is not even on it. 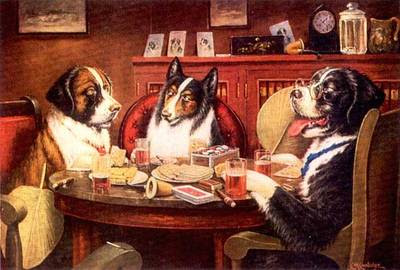 Cassius was not confined to the small town of Antwerp his entire life. In 1873 he took a trip to Europe where he visited Great Britain and France. When he returned to the states he moved to Rochester, New York. Here he worked writing articles about traveling for the Watertown Times. One of the longest trips he covered consisted of traveling from Ogdensburg, located in upstate New York, to Chicago via the Great Lakes. While in Rochester he also "wrote and illustrated 'Kash's Kolumn.'" The exact nature and content of this column is uncertain. It is possible that this column is where his traveling stories appeared.

Although his paintings provided most of his legacy, very little is known about Coolidge's formal art education. As a child he often used crayon to sketch portraits and scenes of the farm around him. Later in his life, a coworker saw drawings Cash had made and thought he was wasting his talent. The coworker urged Cassius to travel to New York City to explore his abilities. The two traveled to New York, and Coolidge received several formal art lessons from a portrait painter. He was, however, unable to secure a decent job so he returned to his hometown several months later. Other than this small excursion, it appears the Cassius had no further formal art education. Almost all of his artistic skill seems to have originated from practice and natural talent. 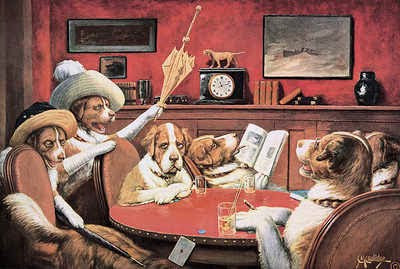 Coolidge was an established artist even before he painted anything involving dogs and poker. By the time he turned twenty he was painting cartoons for the local newspaper and teaching penmanship. He also earned money as a "lightning cartoonist." This profession involved making quick sketches of people before an audience that paid twenty-five to fifty cents to watch. This was a type of entertainment people enjoyed before television, or even radio, existed. Through his drawings and sketches he was able to obtain good publicity in the newspapers and surrounding towns. Cash also illustrated several books. His first cousin Asenath Coolidge wrote two books, Prophet of Peace and The Independence Day Horror at Killsbury, which Cassius illustrated.

One lasting idea Coolidge had, besides the poker dogs, was an invention he called Comic Foregrounds, which resulted in a patent. These foregrounds are the familiar life-sized portraits with holes located where the head should be. The patrons stick their head through the hole and are transformed into a strong man, beautiful woman, or immersed in a fantasy scene. Today they are common around carnivals and tourist traps. Coolidge made hundreds of different paintings for these foregrounds, some of which had titles such as "Man Riding a Donkey" or "Fat Man in a Bathing Suit." He started a mail order business selling these caricatures, which provided most of his income later in his life. Coolidge could not complete all the work on the foregrounds himself, so he hired local art students to hand letter titles on some of his creations. 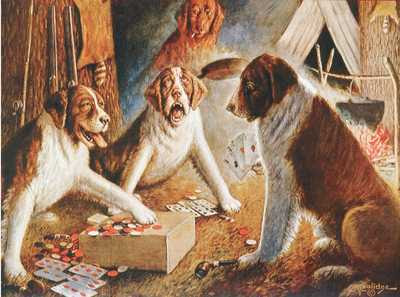 One of the most surprising aspects of Mr. Coolidge's life is that he actually planned and wrote an opera. This comic opera was titled King Gallinipper, and it dealt with eliminating a mosquito epidemic that New York and New Jersey were experiencing at the time. He designed the costumes and the scenery as well. This opera was produced and actually shown on stage. He also wrote two other comedies, A Western Heiress and Le Moustique in 1885. The former was printed Philadelphia, Pennsylvania, but it is not believed either was produced.

Cassius was a bachelor until age sixty-four, when in 1909 he married the twenty-nine year-old Gertrude Kimmell. She was a student at an art institute whom he had employed as a letter painter for his Comic Foreground mail order business. The next year, the couple had their first and only child, a daughter named Marcella. After his marriage Cassius and his new wife moved into a house in Bay Bridge, Brooklyn. Cassius called the house Owl's Head after a nearby park. As a result of the couple's farming background, they tried raising chickens at their new house. Cassius even built a chicken coup. It, however, soon became evident it was uneconomical to raise chickens, and Marcella used the coup as a playhouse. Cassius also suffered a permanent injury living there. After trying to chase mischievous boys from an abandoned house, he fell from a window and hurt his knee, leaving him injured for the rest of his life. 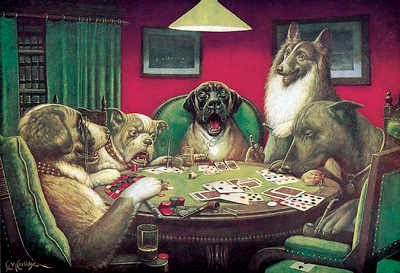 During this time the demand for Cassius's caricatures decreased, and the family needed more money. Around 1916 Gertrude took a course to become a librarian to augment their income. She eventually found a job as a filing clerk for a large Manhattan law firm. This provided for the majority of the family's income. Cassius tried to supplement their income by writing but was unsuccessful. He did, however, do many of the chores around the house, which was uncommon for a man to do then. In 1928 they decided their house in Bay Bridge was too large, and they built a new home in Grasmere, Staten Island. It was located in a rural location, and Cassius's wife and daughter spent approximately three hours a day commuting to and from work and school, respectively. Cassius had grown old by this time, and many of his friends had either moved or passed away. Mr. Coolidge died on January 13, 1934 just short of the age of 90. He is buried in Hillside Cemetery in Antwerp, New York alongside his wife, who passed away on August 4, 1977.
Posted by Robalini at Wednesday, February 10, 2010

There's definately a great deal to find out about this issue. I really like all of the points you have made.

I am hoping the same best work from you in the future as well. http:/win-casinos

Its like you read my thoughts! You appear to know so much about this, like you wrote the e book in it or something.

I think that you just can do with a few % to drive the message home a little bit,
but instead of that, this is excellent blog.
A fantastic read. I'll definitely be back.
carpet cleaning new york