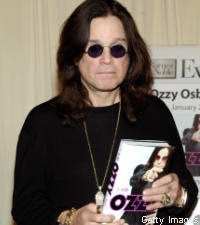 Ozzy Osbourne's recently-released autobiography, 'I Am Ozzy,' should be required reading for any aspiring rock star. For starters, it would teach all up-and-comers not to bother with the drugs and debauchery because they're never going to top the Ozzman.

Since the book has many over-the-top stories -- including one where Ozzy woke up on a freeway after drinking with Motley Crue -- the former Black Sabbath frontman tells Spinner he was hesitant about writing the memoir for a long time. "I've been approached for years about doing a book and I kept putting it off and putting it off," he says. "Sex, drugs and rock 'n' roll: that's all people in the music industry want to hear about."

Sure, the seedy bits are in the book, but Osbourne also offers truthful and poignant insights on the regrets in his life, from his sometimes turbulent relationship with his mom to stupid youthful acts of animal cruelty. Is there one thing he regrets the most? "The way I treated my first wife [Thelma]. I was young, I was drinking, using drugs, -- I was a rock 'n' roll star and I thought that gave me a license to be an a--hole to some degree," he says. "I thought I was just being cool and that's just what we all do, but I got married way too young and I had children way too young."

Osbourne met Thelma Riley in 1970 at a club called the Rum Runner, where she worked in the cloak room. The two moved in together and eventually got married in the registry's office in 1971, before Sabbath went to America for the first time. After hitting it big, Ozzy enjoyed all the perks of being a rock star, including sex with three women in one night. "If I loved Thelma, I certainly didn't treat her like I did ... For years I acted like a married bachelor, sneaking around," he writes. "I put that woman through hell. I should never have married her. She didn't deserve it: she wasn't a bad person, and she wasn't a bad wife. But I was a f---ing nightmare."

The two stayed together for their children -- Jessica, Louis and Thelma's son Elliot -- until 1982, when they filed for divorce. The reason for the final split? Osbourne confessed to Thelma he'd fallen in love with his manager, Sharon Arden.

Looking back now, he owns up to his mistakes. "I was wrong in a lot of ways. I now have turned completely around in the respect [that] I do not drink, I do not take drugs, I am not cruel to animals. I have lots of animals in my house now," he says.

'I Am Ozzy' is available now from Grand Central Publishing.
Posted by Robalini at Wednesday, February 10, 2010