Mardi Gras and the Illuminati 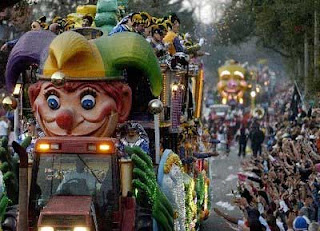 Is no vestige of American culture safe from the sinister tentacles of the illuminati? Our LDD operative, Jack Heart, has put together an amazing… almost unbelievable report from inside the world’s oldest conspiracy. The following piece of investigative journalism uncovers the occult origins of Mardi Gras, America’s most spectacular party staged in New Orleans, Louisiana.
The history of Mardi Gras began long before Europeans set foot in the New World. In mid February the ancient Romans celebrated the Lupercalia, a circus like festival not entirely unlike the Mardi Gras we are familiar with today. When Rome embraced Christianity, the early Church fathers decided it was better to incorporate certain aspects of pagan rituals into the new faith rather than attempt to abolish them altogether. Carnival became a period of abandon and merriment that preceded the penance of Lent, thus giving a Christian interpretation to the ancient custom.

During the late 1700's, pre-Lenten masked balls and festivals were common in New Orleans while it was under French rule. In 1704, Mobile established a secret society (Masque de la Mobile) ... similar to those who form our current Mardi Gras Krewes. It lasted until 1709. In 1710, the "Boeuf Graf Society" was formed and paraded from 1711 through 1861. The procession was held with a huge bull's head pushed alone on wheels by 16 men. This occurred on Fat Tuesday.

During the early 1800's public celebrations of Mardi Gras centered around maskers on foot, in carriages and on horseback. The first documented parade occurred in 1837. Unfortunately, Mardi Gras gained a negative reputation because of violent behavior attributed to maskers during the 1840's and 50's. The situation became so bad that the press began calling for an end to the celebration.

In 1857 six New Orleaneans saved Mardi Gras by forming the Comus organization. These six men were former members of the Cowbellians, an organization which had put on New Year's Eve parades in Mobile since 1831. The Comus organization added beauty to Mardi Gras and demonstrated that it could be a safe and festive event. Comus was the first organization to use the term krewe to describe itself. Comus also started the customs of having a secret Carnival society, having a parade with a unifying theme with floats, and of having a ball after the parade. Comus was also the first organization to name itself after a mythological character (son and the cup-bearer of Dionysus). 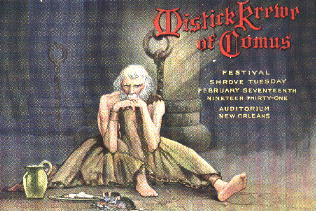 In 1832, William Russell, whose family fortunes were made smuggling opium to China through Turkey, founded a chapter of the House of Rothschild’s Illuminati—Knights of Templar at Yale University and called it Skull and Bones. Code numbers are important as a form of identification and communication to the upper echelon within this secret elitist society. Three is a key number. The number 33 is a passage into one of the highest stages of membership within this secret elitist group. The number 13 is a form of identification among these elitists. The official inscription of the Order of Skull and Bones within the building at Yale University called The Tomb is 322. Some people interpret this as the year of its founding, 1832, and that Skull and Bones is one of the 3 chapters of this Brotherhood of Death. The first chapter was founded in Germany. The second Chapter is at Yale University. The third chapter was to eventually be founded, when the time was right, at Tulane University School of Medicine located in New Orleans, Louisiana.
The headquarters for the Mystick Krewe of Comus became the Picwick Club. Here before the days of computers, telephones, etc, a place of secret communication was established for those in the higher levels of the Illuminati’s New World Order. The ordinary members of the Mystick Krewe of Comus had no knowledge of what Albert Pike, John Slidell, and Judah Benjamin were up to. The three secret elitist could also establish their code numbers. The number thirteen was used as the number of the invited guest to establish the original number of founders. The kings identity of the Mystic Krewe of Comus was kept secret.
The Skull and Bones Society was established in secret at Tulane University in New Orleans in October 1907. Dr. Isadore Dyer was one of the founding members. Dr. Isadore Dyer was a graduate of Yale University and was a member of the Berzellus secret society at Yale. This Brezellus secret society is a sister Yale member of Chapter 322-Skull and Bones-the Brotherhood of Death.

U.S. President Franklin Delano Roosevelt conspired with Skull and Bones Henry L. Stimson, who was appointed by Franklin Delano Roosevelt as his Secretary of War, and with other 33rd level Winston Churchill to have the Japanese bomb Peal Harbor. The bombing of Pearl Harbor was necessary to destroy the isolationist movement in the U.S., and to force the U.S. into military involvement in the Wars of Europe.

The House of Rothschild-Skull and Bones-Illuminati’s plan was to force the U.S. into the European military theatre. Winston Churchill and Franklin Delano Roosevelt and Skull and Bones Secretary of War Henry L. Stimson had broken the Japanese code and had pre-knowledge of the Pearl Harbor bombing plan of the Japanese.

Agents of Skull and Bones with blessing and involvement of J. Edgar Hoover FBI Director and 33rd level executioner-cover up specialist for the elitist bloodline of the House of Rothschild murdered Freemason Charles Lindberg’s son. This killing of freemason Charles Lindberg’s son was to set an example that the isolationist stand against the U.S. becoming involved with the wars of Europe was not the position or the will of the Illuminati. 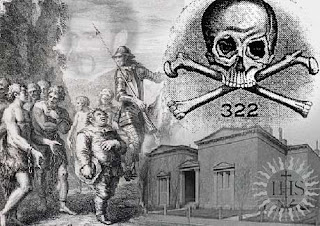 Mardi Gras Krewes today are developed from private social clubs that have restrictive membership policies. Since all of these parade organizations are completely funded by its members, there is no legal way to track their activities. We are only left to guess at what these nefarious organizations are up to… or who is really pulling the strings…

Meanwhile… the vast majority of the American public goes about their business without giving much thought to the “Secret Chiefs” or their agenda of world domination. But this situation of obliviousness on the part of the average citizen may not be as hopeless as it first appears. There is something hopeful in the resiliency of the American Spirit in it’s defiance of controll from above. This “thumbing of the nose” at authority is demonstrated quite nicley at Mardi Gras itself. The tumultuous reveling prior to lent is a magnificent example of “stickin’ it to the man” through obstinance. The classic tune that typifies Mardi Gras, Iko-Iko says it best…

If you don’t like what the big chief say, sing “Jac-o-mo fina na (loose translation –let the goodtimes roll)!!!

All the time fоllow yοuг heart.

Its like you read my minԁ! You appear to know
so much about thіs, like уou wrote the book in it or something.
I think that you could dο wіth somе picѕ to drive the message homе a bit, but оther thаn that, this іs fantaѕtіc blοg.
A fantastic read. I will сеrtainly be back.